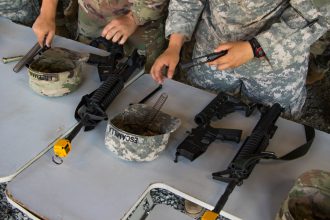 Cadets are tasked to take apart and then reassemble their rifles as part of the Individual Task Test at Fort Knox, Ky. July 13, 2019. | Photo by Jacob Hempen, CST Public Affairs Office

The ITT evaluates Cadets in many different areas, but it’s the third skill that has Cadets especially nervous.

What are these radio call procedures, or the 9-line medical evacuation call? And why does it have Cadets nervous going into the test?

The 9-line is a term that refers to a call made for medical evacuations in the field. Due to the serious nature of the call, Cadets, as well as other Army personnel, are expected to make these calls with perfect clarity and precision.

Cadets go through the process of using their radios to call in medical evacuation as part of the Individual Task Test at Fort Knox, Ky. July 13, 2019. | Photo by Jacob Hempen, CST Public Affairs Office

Hannah Orland, a Mount St. Mary’s University Cadet, spoke on this precision and why it’s the little things that make such a big difference.

The content of the call is not the only thing that Cadets have to keep track of, as another Cadet would point out.

Cadet Aaron Abshire, a Waldorf, Maryland, native, said that he was nervous about 9-line because of the vocabulary used during these calls. 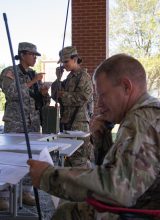 Cadets test the radio by calling the Cadre and speaking the proper phrases to call in a medical evacuation during the Individual Task Test at Fort Knox, Ky. July 13, 2019. | Photo by Jacob Hempen, CST Public Affairs Office

Both of these expectations for call procedure are reasons to take this part of the test very seriously. One Cadet hones in on what makes these calls a big deal in a short and sweet manner.

Cadet Sofia Lares, from the University of Texas San Marcos, gave her take on the 9-line call.

“The only thing that I would say is a little hard to learn, and I think it is for everyone, is nine line,” the San Antonio, Texas, native said. “You have to be precise because in the real world it’s somebody’s life on the line if you don’t do something correctly.”

At the end of the day, one must not forget why these calls are made. Each Cadet knows it and this training makes sure when they reach the field they will be able to pick up the radio and make that call.