Cadets of the 4th Regiment of Basic Camp were taken through the General George Patton Museum of Leadership the afternoon of July 12.

Artifacts from a time long lost, but not quite forgotten, inhabit the museum grounds. From armor to uniforms, an old dog collar to a 48-Star American flag, protest art to a firetruck used in 9/11, the Patton Museum has it all.

A Moment of Inspiration

For many of the Cadets, this experience was one that would shape them as future Army Officers. 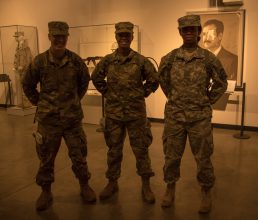 “I am the first person in my family to be in the military,” Cadet Joel Tedone, attending Arizona State University, said. “Coming here and being able to see why it is that so many people chose to do what they do is really motivating for me.”

The Woodhaven, Michigan native said he would never forget this event. While this is the past for us, Tedone said, it was the present for those people. We now have a chance to duplicate the good decisions they made and avoid the mistakes.

“We have a chance to mold the future if we can learn from the lessons we gained from the past,” Tedone said.

Many found themselves just as moved by what they were seeing.

Cadet Tanzania Guest, from San Diego, California found inspiration in seeing one of the very firetrucks that struck down flames after the 9/11 attack. 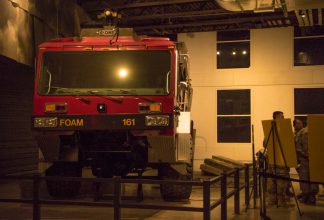 One of the firetrucks from the 9/11 attack sits on display at the museum. Fort Knox, Kentucky, July 12. | Photo by Megan Reynolds, CST Public Affairs Office.

“I just really embraced it,” Guest, who attends Johns Hopkins University, said. “I remember being 9 at the time it happened [the 9/11 attack] and, although I wasn’t really sure of the importance of it, and how big it was going to impact our country… It’s really serious and these things are still going on today.”

Guest found the opportunity to go through the Patton Museum an important one; instilling the history of the U.S. Army in the organization’s future leaders gives them a sense of purpose, she said.

Many agreed with Guest, knowing the history is something that benefits every soldier.

“I believe it [going through the museum] helps us because we’ll be lieutenants that know what we’re talking about,” Cadet Zenia Bridges, from Clarksville, Tennessee said. “We’ll know our history.” 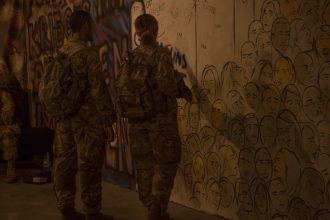 Coming away from the museum with a renewed sense of military purpose, the Cadets were ready to use what they had learned. As future Lieutenants, the 4th Regiment Basic Camp Cadets knew that they could apply what they’d learned to future situations they may find themselves in.

General George Patton is still teaching soldiers to this day, and every Cadet that knows his name can attest to that.

Got Gear, Not Fear.