FORT KNOX, Ky. — 1st Regiment, Basic Camp performed Field Training Exercises in their “run” phase July 14 during Cadet Summer Training. The “run” phase of an exercise consists of cadre taking a step back and providing feedback during the exercise when absolutely necessary to Cadets. 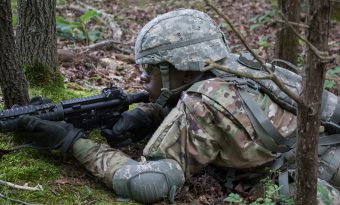 “We just conducted an ambush on the objective, which was a linear ambush on the road. We had two enemy and were a squad element. We were directed by our squad leader to form up and I was on Bravo Team, which was the assaulting element. So, we were going to push through the objective and clear it and search it before the support team would push through,” said Cadet Joselyn Quintanilla, University of Tennessee at Chattanooga.

“So, some of the challenges they face are being able to get over that stress factor. What I mean by that is the transition from being a college student, being able to do as you please, and then coming into a controlled environment where you’re pretty much being told what to do and then get all this knowledge and information which is critical in a life or death situation and then apply that quickly,” stated Jones.

Part of this fast-paced and stressful experience is learning about how to be accountable for yourself and for others. Cadets show this in a few different ways.

The points Quintanilla brings up are important as one Cadet explained.

One Cadet reflected on how he planned to be more accountable during training and upcoming exercises. 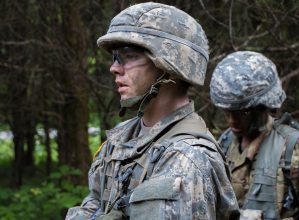 “I would say the two biggest things for me are just to make sure I’m always doing my part, that my teammates can always count on me and know I’m going to be in the right place at the right time,” reinforced Cadet Spencer Schoen, Utah Valley University. “The second would definitely be that communication aspect, making sure that, if I’m one of the leaders, I’m doing a good job disseminating information from top to bottom. If I’m one of the members of the team, I’m doing a good job receiving and reciprocating the information that’s given to me.”

At the end of the exercise, Jones imparted some advice for future Basic Camp Cadets.

“Take it day by day, be a sponge, listen to your cadre because they’re going to set you up for success, and understand that there’s going to be a lot of ways you can conduct a mission and you’re going to be told multiple ways. Don’t get overwhelmed with the different terminologies and things that people show you,” explained Jones. “Keep it in a toolbox because, later on in life, that might be a way you can accomplish a mission versus the way that you were taught. There’s not one way to accomplish the mission. We’re just here to teach you the basics. For the Cadets that come out here for Basic Camp, it’s basic.”