Before Advanced Camp Cadets enter the field for their field training exercise they learn how to set up patrol bases and what to expect from some common situations. Squad Movement Drills allow Cadets to choose what they feel they need to work on before entering the field at Wolverine, or the walk phase of field training, the slowest and easiest of the exercises. 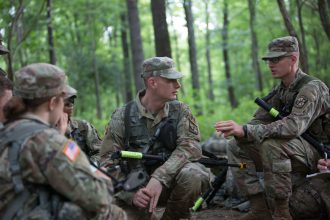 Army ROTC instructor Master Sgt. Mark Alston, Duke University, said the Cadets will start slow by setting up their base and work their way into any training they need to run through.

“They start with setting up patrol base [operations], they are going to go out and select the location for their unit to stage at prior to conducting an operation,” he said. “They will be pulling security and learning how to do patrols.”

The platoon sergeant for this mission Cadet Mason Wikoff, Baylor University is responsible for resource management and morale of the entire platoon. 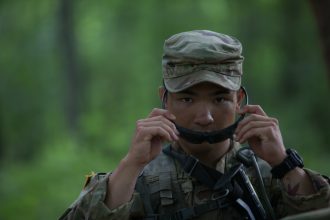 Wikoff stated that they are then given multiple two hours of training sessions with a 30-minute brake where everyone can read-up on what’s next.

Acting platoon leader, Cadet Benjamin Thornton, Western Kentucky University was responsible for selecting where the patrol base will be located and for making sure all admin work is completed.

“We are prepping for our deployment to Atropia, the country name we are using for training purposes,” he said with a grin. “Right now we are getting some admin stuff done right now. We are getting details done, filling up on water and getting security set-up. After that we are going to start training.”

Wilkoff said, he was ready for his 14-day stretch in the field and excited for training. 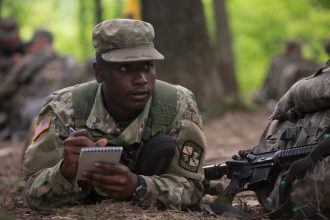 “I’m looking forward to establishing our [standard operations procedure] for our ambush and attack lanes,” he said.

Thornton was excited and nervous for the squad movement drills, but feels the platoon will be able to handle any challenges that might arise.

“It’s always nerve wracking leading your peers,” he said, “There are people here who are subject matter experts in things that I am not. But I’m not very nervous as a platoon. Everyone fills in a niche and has information that they ready to share with everybody else.”

Alston also has high expectations for 8th regiment Cadets saying they have grown significantly this summer.

“Watching their growth from day one until today has been amazing,” he said. “I’m pretty confident that 8th regiment is ready to go out and do some really great things during training.”

Cadet of the Week: Mayra Bendavid