Cadets of the 10th Regiment of Advanced Camp completed the six-mile ruck march in the early hours of this morning, July 14.

Queen’s “Bohemian Rhapsody” ringing through their ears, Cadets were able to find some pretty interesting ways to stay motivated.

Some may even call them quirky.

“For both my rucks and the two-mile run I sing ’99 Bottles of Beer on the Wall,’” Cadet Josh Hopingardner, from Yorktown, Virginia, said. “I sing all the way down to one and then I work my way back up.” 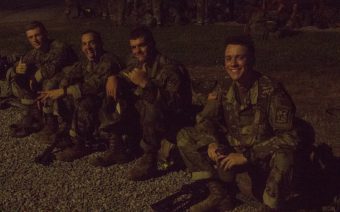 Hopingardner, attending University of Montana, said singing helps to keep his breathing steady; it’s also a great distraction from any cramping or pain he may be feeling.

The quirks don’t stop there.

Cadet David Taylor, a Kansas City, Missouri native, says he talks to himself during the rucks, but proclaims that it can’t be too quirky of a habit.

“Any time I’m down, or I feel like I’m not trying as hard as I can, I build myself back up,” Taylor, who attends Missouri State University, said.

Still, others stick to singing to keep their spirits up.

“I sing in my head, and I use it to catch the person in front of me,” Cadet Cameron Irvine from Killeen, Texas said.

Singing “Paradise City” by Guns ‘n’ Roses after being asked what the best rucking song was, Irvine said the song keeps him “looking forward.” Irvine, attending Texas State University, has completed many rucks previously, including the Bataan Death March, and has found this rock classic to help him every time.

While the Cadets may have enjoyed their time on the 6-mile ruck march, all had their thoughts on something much more meaningful.

Hopingardner was the first to finish the ruck march in his company, and third overall. While he was most definitely excited in his success, he still wanted to give his family a shout out. 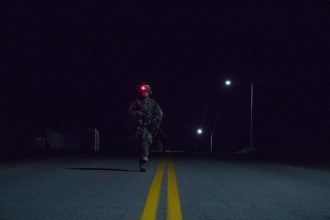 “Mom and dad, I just can’t wait to see you during family day,” Hopingardner said.

He wasn’t the only one thinking of family; Taylor wanted his family to know he was thinking of them, as well.

“My mom, my dad, my brother Samuel,” Taylor said. “I just want to tell everyone I love them, I’m thinking about them and I can’t wait to get back home.”

Irvine’s thoughts were for his ROTC family from his university.

“All my Cadets already graduated, so I got a few that are coming in from 11th Regiment, so congrats on graduating,” Irvine said. “I’m right behind you all.” 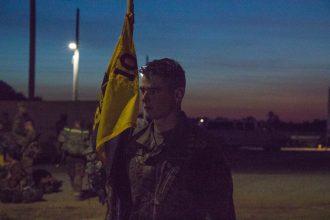 Time flies at Advanced Camp, any Cadet will tell you that. Once they step foot in the field, they blink an eye and seemingly their camp experience is over and they’re standing in front of their family, graduating.

Before you know it, your Cadets will be home.

Lessons on Communication At AO Grizzly: The Bare Necessities

In the Early Morning Rain