“On this site a Cadet learns to save a life,” said Lt. Col. Danielle Rodondi. “We teach them how to evaluate a casualty. But the whole goal here is for them to get first aid skills that they can use anywhere.” 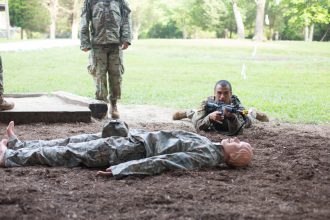 Rodondi is an Army ROTC military science instructor at Augusta University and the officer in charge at the first aid training site.

“What I really enjoy about this site is, where in the world can you put groups of people from all different walks of life and be able to – in 75-days – train over 10,000 people on how to save a life,” she said. “It’s a pretty amazing accomplishment that we do.”

“I love the hands on training,” she said. “[Tactical combat casualty care] is providing care while under fire, and right from the beginning you have to drop to the prone and return fire. Then you can proceed to help. That aspect is very realistic.”

The Cadets start their training with an instructor led class where they Cadets are introduced to instruments, acronyms and the order of operations needed to save lives in the field. 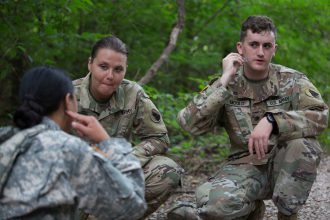 The medics start by explaining the importance of returning fire to keep themselves safe and then insuring any major bleeding has been stopped to keep a casualty form bleeding out.

The Cadets get a chance to familiarize themselves with tools like a tourniquet, which can be used to reduce or stop bleeding, and a nasopharyngeal airway insertion, which is used to keep an airway open.

After the course and questions answered, the Cadets are broken into small groups of 5-7 people and expected to perform tactical care on a dummy named Randy. The Cadets are encouraged to ask their team members questions to help everyone grow. 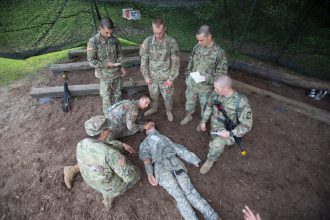 “We are getting one-on-one experience with great combat medics,” he said. “These are [non-commissioned officers] people that have been doing this for a long time, people we really respect and appreciate being out here for us, especially the Lt. Col. [Rodondi] have been fantastic to us.  So far this has been great.”

The Basic Camp Cadets are expected to familiarize themselves with the training before they graduate on August 1.

“At the end of the day it’s getting graded at Advanced Camp,” Watson said, “So I’m getting initial instruction and expertise now and I have a year to prepare for it.

Stand Up and Lead: Lessons from a 2LT