“We just did a six-mile ruck march. It’s just putting a 35-pound ruck on your back and walking for about six miles,” clarified Cadet Celeste Doiron, California Polytechnic State University. 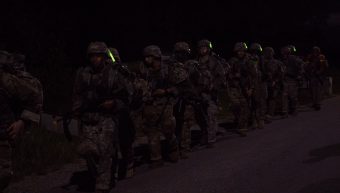 While traversing each mile, Cadets reflected on what they found the most challenging about the ruck.

“Probably the main thing was the terrain. As far as I know, most ruck marches are on flat ground. This is relatively hilly. It wasn’t too bad,” stated Cadet Brody Roberts, Mississippi State University.

Other Cadets found the distance to be a challenge, but also found the motivation to push through adversity.

“I’ve never rucked more than four miles before and it was at a much slower pace. So, I was pretty nervous about this ruck, considering the distance changed from what I have previously done and, as the guide on bearer, I felt a lot of pressure to stay in and do well,” said Cadet Emmanuelle Beaurpere, University of New Hampshire. “I was really surprised by how I performed because I wasn’t expecting to do that well. I just took on the responsibility of being the guide on bearer and at the front of the whole company and I used that as motivation to success.” 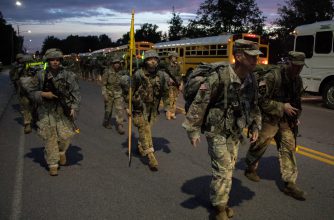 The guide on bearer, as Beaurpere explained, “represents the company. They stand at the front of the formation and carry the colors wherever we go. It’s my job to take care of it, bring it with me wherever I go, don’t lose it, and not let it fall. So, it kind of symbolizes a lot for the company and, usually, the person who is selected is squared away, so I felt a lot of responsibility and honor carrying it.”

Beaurpere’s father also held the position of guide on bearer when he participated in ROTC.

There is a lot of responsibility associated with being the guide on bearer including setting the pace of the company, motivating the other Cadets, and representing the company in the best way possible.

“The guide on bearer isn’t just for one person, it’s for the group. It helps to remind you that you’re with a lot of people and everyone is going through what you’re going through,” said Roberts.

“I’ve been the guide on bearer before,” said Cadet Dean Camp, Indiana Weslyean University. “It’s definitely rewarding because you get to inspire your team. It’s something we can all look at and be proud of. It’s inspiring because you can see people, even at their worst, still trucking along because they’re at the front of the formation. They’ve got to keep going. So, it’s motivating to see people digging deep and just keep going.” 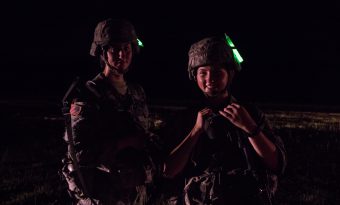 The motivation Cadets experienced carried over, not only into what they want to take back to their home universities, but also what they have decided to take away from their experience throughout Basic Camp.

“I think, to bring back to my home university, the main thing I want to takeaway is how important the teamwork is,” said Doiron. “You can’t do Basic Camp as an individual. You have to work with your entire platoon. Even if you struggle to work with some of the people in your platoon, you come together and realize you’re not going to make it through alone because you’re pretty much graded on how you work together.”

Where the only showers are rain showers: Advanced Camp FTX