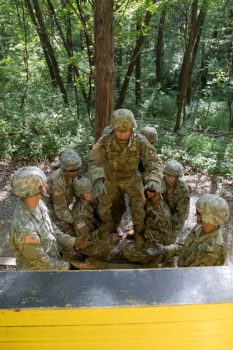 Cadet Jack Lacy of Texas A&M University prepares to be thrown onto a wall at the Wall Banger obstacle during FLRC training. | Photo by Luke Heibert, CST Public Affairs Office

Cadets were given just barely enough material and time to complete the obstacles they faced. It was a challenging task. But growth doesn’t come in complacency.

“The purpose [of FLRC] is to basically team build and also to develop critical thinking skills,” Cadet Jack Lacy of Texas A&M University, said. “So you can solve problems faster and know how to communicate more effectively and efficiently in a stressful situation.”

An example of the Idea Factory

No one wants to lose; so when the timer starts and cadets begin to navigate an obstacle, the pressure to perform is great. And that’s when character becomes apparent.

Half of the group begins throwing out ideas while the other half sinks to the back. The Squad Leader tries balancing ideas, but cannot get the ball rolling into a cohesive plan, because there are eight individual plans fighting against his leadership.

What just happened is the idea factory, a problem where there is an unfiltered source of ideas with no organization of those ideas. 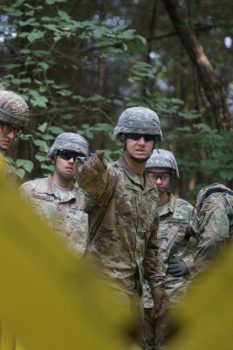 “The problem that arises [with the idea factory] is if everyone is talking at once, everybody starts spitting out their ideas and nobody’s idea ever actually ends up being heard because its just lost in a sea of ideas,” Cadet Kevin Gauthier of Temple University, said.

Gauthier said that initially, his squad’s communication had been “rocky” but that didn’t persist.

“So to combat that, you need to make a very efficient and fluid means of communication so that everyone’s opinion is heard,” Gauthier added.

Leadership requires communication, and FLRC tests leaders’ ability to communicate well. It’s a trial that isn’t easy to overcome, but one that is crucial in growth as a leader.

Leaders are born out of the trials they face and the manner in which they face them. FLRC facilitates that growth and development.