FORT KNOX, Ky. – Rain pouring down, a cloudy, overcast sky watched over the gobbling turkeys making their way across George Blair Range the morning of July 17. 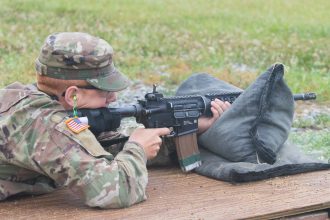 Cadets of the 10th Regiment of Advanced Camp spent their morning qualifying on their M-4 Carbines. While qualifying is difficult even on a bright, clear-sky day, the rain brought with it some extra challenge.

This wouldn’t stop the Cadets from reaching success, though. With the quote of the day being, “I’ll be hooah my whole life,” said by Cadet Cady Carpenter, attending the University of Texas at El Paso, the challenge was embraced.

And what’s more hooah than shooting in the rain, decked out in full uniform?

“It was a lot better than the other days on the range,” Cadet Tanner Holman, an Arlington, Texas native, said. “It felt really good to finally qualify.”

The University of Texas – Arlington student said, while he was definitely feeling accomplished after qualifying, he was very nervous beforehand. 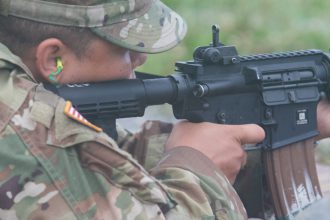 “This rainy weather, the fog moving in, I was a little worried about this [qualifying], but it was good to finally get it done,” Holman said.

Holman wasn’t the only one whose nerves were on the rise due to the weather.

“I thought it was pretty tough,” Cadet Allan Li from Saint Mary’s County, Maryland said. “It’s really hard to see the color contrast on this course, especially when we have fog here, too.”

Li, who attends the University of Maryland – College Park, said that Cadets were given “more than enough” instruction to qualify. The weather was the hardest part.

Not all struggled with the weather, though.

Cadet William Huns is from Knoxville, Tennessee. Not too far from Kentucky, the rainy, foggy weather was no shocker to him.

“It’s kind of rainy, the conditions weren’t great, “Huns, a student at the Virginia Military Institute, said. “Other than that, it wasn’t too bad. I knew I qualified when I got off [the range].”

Qualifying on the George Blair Range, which requires Cadets to shoot a 23 to pass, is one of the final RECONDO events at Advanced Camp. For many, after this event, they feel a sense of relief.

It’s the field and then home.

“I’ll Be Hooah My Whole Life”