FORT KNOX, KY.— “When they [Cadets] go to Advanced Camp they are going to be evaluated as an infantry officer, [and] as an officer, you are a chaos manager. We are trying to introduce them to that chaos so they become used to it and become good chaos managers,” said 2nd Lt. Michael Everett, who commissioned out of the College at Brockport State University of New York. 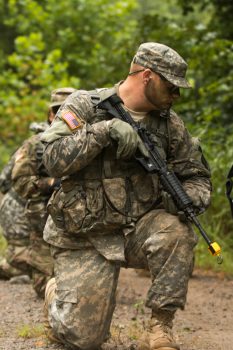 On July 17, Cadets from the 2nd Regiment Basic Camp learned squad tactics for a Field Training Exercise (FTX). After listening to Cadre tell them about the different tactics, they practiced them in a Cadre-led setting.

For many, this was their first time at an FTX – with little sleep and having the training interrupted due to fluctuating weather, it was not an easy one. “This Basic Camp environment is like being thrown into a deep pool of cold water and you have to get used to it,” said Everett.

Everett went through Basic Camp two years ago, completed Advanced Camp last summer and said, “being on the other side is a lot of fun. Being a teacher is probably one of the most rewarding experiences I have ever had.” 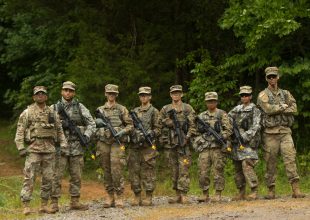 Before going to Basic Officer Leader Course (BOLC) for medical service, Everett is spending his summer in Fort Knox teaching Basic Camp Cadets about FTX. Once Everett completes BOLC, he will deploy to Korea with his unit.

Although discipline is crucial, as a teacher for Cadets, he said, “you have to learn when to force discipline or when to enforce a positive learning environment.”

The most challenging thing for Cadets, according to Everett, is communication. “Everyone struggles with communication in the Army, so out here we are focusing really hard on [it].” 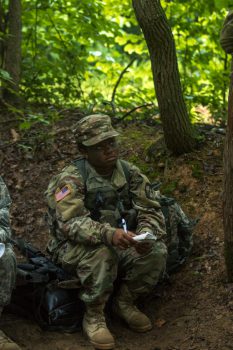 “We try to create a positive learning environment where there is good communication and a positive relationship between both the student and teacher that way the environment is conducive to their learning,” said Everett.

When Everett went through Basic Camp, his biggest struggle was, “having the courage to step up and be a leader.”

Everett said it is important to ask questions and learn your motivation, “Camp helped me find my motivation, figure out who I was, what I wanted to do with my life and what kind of leadership style works for me. Once I figured out all of that, I then found the courage to start standing up and being a leader.”

Finding a Needle in a Haystack