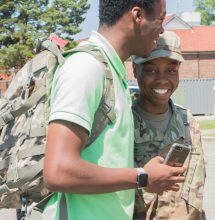 Family members rejoiced in seeing their Cadets on family day after having been separated from them while they trained. While family day warrants Cadets a free pass to leave Fort Knox in the company of loved ones, it also marks the eve of advanced camp graduation.

Before being released to see their Cadets, family members were given a presentation in Waybur Theater where they were introduced to the cadre of 5th Regiment and briefed on the rigorous training their Cadets received. One cadre noted that over the course of their summer training, Cadets had marched over 100 miles. 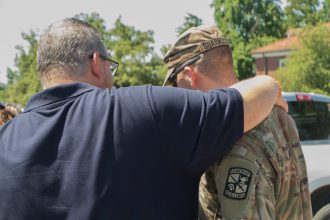 “I am so happy to see my daughter and I am really proud of her,” said the father of Cadet Ominique Buchholz, who attends Pennsylvania State University.

At one point during the presentation one of the cadre asked veterans in the crowd to stand and be recognized. A myriad of men and women stood and were applauded for their service.

The number of veterans and the crowd’s ovation prompted one of the cadre to remark on the Army legacy present among family members and Cadets.

“I guess it’s a family business,” he said.