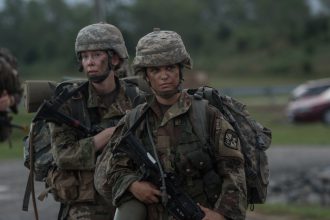 Cadet Micalea Moffatt, from Loyola University, watches the rest of her platoon catch up before she moves on. Cadets are given four hours to completed the ruck as a platoon as they end their 12-mile ruck march at Cadet Sumer Training at Fort Knox, Ky., July 18. | Photo by Jordyn McCulley, CST Public Affairs Office.

Cadets ruck the 12-miles with 35 pounds in their ruck sack, along with their rifle, advanced combat helmet (ACHs) and Fighting Load Carrier (FLC). Before they are told to put all of the equipment together they were woken up at 1 a.m. to start their day.

Cadets start at TA Densberger and walk the 12-miles back to their barracks. The 12-mile ruck march isn’t a normal ruck march; the Cadets walk in a tactical formation.

Tactical formation is walking in a strategic way to spread out the Cadets out incase of a potential attack.

Walking in a tactical formation helps the Cadets keep pace and keeps everyone together. But that doesn’t mean that the Cadets are not struggling with the 12-mile.

“I always have mental blocks. I have the mental space where I don’t feel the pain anymore and I just keep coasting,” said Cadet Daniel Sheperd, from Hood College.

Sheperd set himself a goal and strived for that — to stay out of that negative mindset.

“It wasn’t that bad, the environment around us was nice and calm,” Sheperd said. “I just set my sights on the goal and kept walking, one foot in front of the other.”

Some need a little more to help them through this mentally challenging test.

For Cadet Tyler Piotter, representing University of Minnesota-Mankato, he relied on his battle buddies to help him through the mental blocks.

“The 12-mile was not bad having battle buddies next to me that get just as motivated as I am,” said Piotter.

Motivation is key in the completing the ruck march. For these Cadets graduation is five days away. 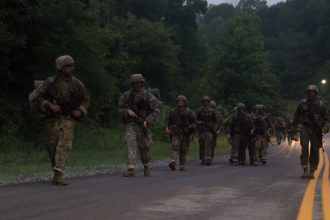 Sixth Regiment, Advanced Camp Cadets march along the road as they zero in on the last few miles of the 12-Mile ruck march as they end their Cadet Summer Training at Fort Knox, Ky., July 18. Cadets are given four hours to completed the ruck as a platoon. | Photo by Jordyn McCulley, CST Public Affairs Office.

Piotter’s motivation was his battle buddies, his family and the idea that he was going home in five days.

“I’m looking forward to seeing my mother on family day,” Piotter said. “And all of my battle buddies and my family are going out to get some Buffalo Wild Wings.”

Through all of the training Cadets go through at Cadet Summer Training, the 12-mile ruck march is the most dreaded.

“It’s not as bad as you think. It’s 37 days and they go by quick and you make friends,” said Cadet Trenton Starwood, from Valley Forge Military College.

Attention in the TOC