Cadets at Advanced Camp go through various forms of weapons training during their Basic Rifle Marksmanship training; Grouping and Zeroing is one example.

Stick to the Basics

“I’ve shot quite a bit through my prior service, I was in the Infantry,” Cadet Matthew Riggs, a native of The Dalles, Oregon, said. “I was able to pull all the fundamentals. They’re drilled into my head.” 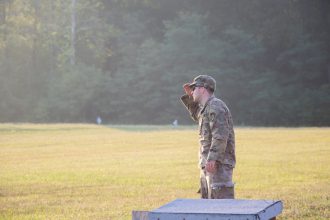 A Cadet looks into the field and scopes out where his targets are likely to pop up before qualifying. Cadets of the 10th Regiment Advanced Camp qualify with their M-4 Carbine Rifles in the morning on the George Blair Range. Fort Knox, Kentucky, July 19. | Photo by Megan Reynolds, CST Public Affairs Office.

Now a student at Pacific Lutheran University, Riggs said every Cadet should know those basic fundamentals: proper trigger squeeze, sight alignment, sight picture, body position and breath control, to name a few. He used those fundamentals to qualify expert with s score of 37.

Riggs wasn’t the only prior serviceman with faith in the fundamentals.

Cadet Daniel Seco, from Miami, Florida, put five years into the U.S. Army before deciding to go Green to Gold. He was a mechanic as an enlisted soldier, and that provided him a good base in weapons training, an important thing during his deployment to Kuwait.

“The fundamentals I learned from Basic Training all the way to my deployment of taking it easy, relaxation,” Seco, attending Florida International University, said. “Shoot on the exhale, just be at your tempo.”

Seco said he was able to bring much more than weapons fundamentals with him. Resiliency and leadership skills also play a large part in his time at Advanced Camp, both of which he said he brought from his enlisted time. Seco shot a qualifying 24.

But it doesn’t take prior service to know that there’s a reason the fundamentals are so tried and true. 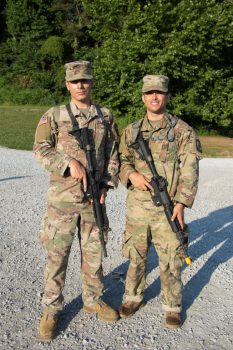 “I’m feeling really good about it, I don’t shoot very often,” Cadet Nicholas Limentato, a Champagne, Illinois native, said. “If you focus on the fundamentals, you don’t get in your head, shooting is just like any other skill.”

Attending Olivet Nazarene University, Limentato said his go-to fundamental is relaxation; keeping calm and focusing on the task at hand gets him through it. Limentato shot a 34 today at the range.

“If I have it in my sights, and I’m relaxed and I know I’m ready, I just pull the trigger,” Limentato said.

No One is Here to See You Fail

The Cadets come into Advanced Camp, all with that little voice in the back their head, afraid they may fail. 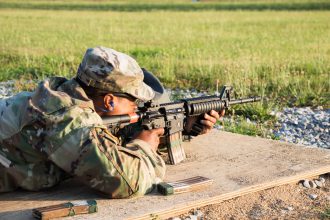 “Relax, no one is here to see you fail,” Limentato said.

How true that is, that no one is here to see you fail. The Cadre, each and every one of them, are rooting for your success. Push on, keep moving forward.

Crawling Through the Dark