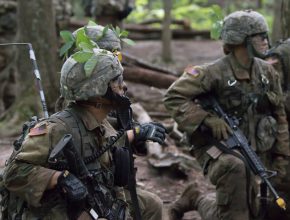 The training Cadets received was part of the walk phase of FTX, meaning that they were assisted by cadre. The Cadets’ mission was to assault an objective held by an opposing force (OPFOR), establish security and assess casualties before proceeding to conduct an after-action review (AAR)

The Army’s Vice Chief of Staff, Gen. James McConville was visiting Cadet Summer Training and observed the platoon’s assault and participated in the AAR.  Although his visit was brief, McConville spoke to the Cadets about their FTX and camp experiences and offered experiential advice. 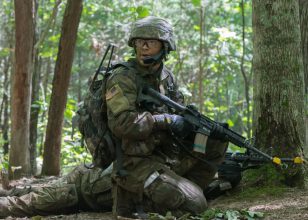 One Cadet told the general that the training he received at Ft. Knox was more authentic than what he had experienced on campus during the academic year.

“Remember that when you’re a leader as a second lieutenant,” replied McConville. “Your soldiers will be saying the same thing.”

Cadet Nicola Patel, attending the University of Massachusetts, said that the terrain of Fort Knox alone was a learning experience as it differed greatly from that of her New-England home. 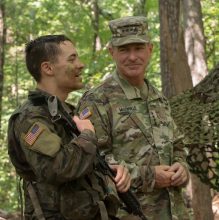 Cadet Frank Woods (Left), University of Missouri, 7th Regiment, Advanced Camp speaks with Gen. James C. McConville (Right), the 36th Vice Chief of Staff of the Army, during his field training exercise (FTX). Woods was awarded a challenge coin by McConville after being recognized by his peers for his example of leadership at Fort Knox, Ky., July 17, 2019. | Photo by Mary Kate Griffin, CST Public Affairs Office.

McConville noted that preparedness and adaptability would be critical for the young second lieutenants in leading Soldiers into combat.

“You don’t know where you’re going to go,” responded McConville. “You must ensure that you train your units so they can operate anywhere. We are a global company, so to speak.”

“You are developing the future leaders of the Army,” said McConville to cadre after a brief. “[They] are joining a military that is at war right now. Regardless of whether [Cadets] join a combat arms branch, [they] will see combat.”