“We just completed a drill and ceremony competition, otherwise known as D&C,” said Cadet Maabendu Sirleaf, New Mexico Military Institute. “D&C is getting uniformity and helping us dress across each other because that’s really essential in the Army, that uniformity, and that’s what D&C teaches us.”

The first part of the competition was between companies and held in the form of a knockout drill as Cadet Erin Wolfe, an attendant of New Mexico Military Institute, explained. Cadets were given a series of commands and, if they were unable to respond fast enough, would be eliminated from the round until the fastest and most prepared Cadet remained. 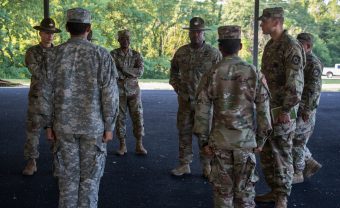 The second part of the competition was between platoons where 16 Cadets and a platoon sergeant were selected from each platoon to represent them. After the competition, drill sergeants tallied the points and announced 3rd Platoon was victorious.

After the competition, one Cadet felt the purpose of D&C was a combination of familiarizing Cadets with military standards as well as testing their ability to pay attention and listen.

“It is a combination of all of that. Also, it is to prove you have military bearing, work as a team as well as an individual to maintain discipline as well as, in the Army, it is a way to get from one point to another as a company or a platoon to go from point A to point B,” explained Wolfe.

Another Cadet felt the purpose was to hone in on teamwork and attention to detail. 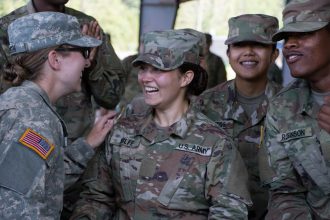 “What they’re really trying to get is attention to detail and teamwork is key. For D&C, attention to detail is essential because if someone says ‘left face’ and they turn right, that’s wrong. You turn left on a left face,” stated Sirleaf. “Teamwork is key because you’re dressing off of one another, which is essential because you want that uniformity. So, when an enemy looks at you, he’s not looking at you as an individual, he’s looking at you as an entire company, platoon, squad, looking at you as that entire front. Because the stronger the front, the stronger the Army.”

Cadets also reflected on what they would take away from this exercise. 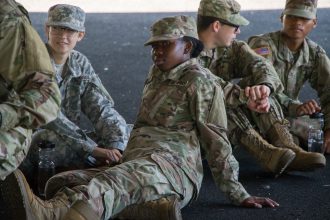 “My main takeaway would probably be the leadership. I learned a lot. My confidence went up this whole month because you have to talk to thirty plus Cadets and you have to give orders on what they have to do passed down from the chain of command,” said Cadet Louis Villanueva, New Mexico Military Institute.

Another Cadet offered a different piece of advice.

“Main takeaway is definitely one team, one fight. When I first started, I was really frustrated because I’ve been doing this for years, but then you have to remember that many people are from different walks of life and, as you’re going on, you really start to realize ‘wow, we really are one team, one fight,’” explained Sirleaf. “Every person here, even through they’re from someplace different where we have people from Puerto Rico, Guam, North Dakota, they’re all here for one purpose, and that’s to serve our country and that’s really beautiful when you think about it. So, we really are one team, one fight. We’re fighting for that one purpose, which is our country.”

It’s #Snot as Bad as You Thought

The Labors of Sharp-Shooting