“We’re learning how to do combat first aid, apply tourniquets, work with chest wounds, stopping bleeding, detecting burning, and any other first aid needs to get someone help before the medic could arrive,” stated Cadet Chad Crook, Western Oregon University.

Cadets were presented with a hypothetical scenario where a Cadet and their battle buddy are on patrol and are suddenly under fire. Then the battle buddy is hit, explained Cadet Brooke Thompson, Westminster College – Missouri.

Throughout the scenario, there are many steps to remember in order to properly administer first aid to your battle buddy.

“There’s a lot of steps and procedures you need to make sure you’re doing it right because you may need to check if they are able to breathe and you may forget about that. You may have to make sure you’re putting on the tourniquet right, turning it tight enough,” emphasized Cadet Zachary Hartman, Virginia Tech. “Then, making sure, after you move them, that the tourniquet is still tight because you don’t want them to start bleeding again.”

These steps and procedures are thankfully broken down for Cadets in the form of acronyms because, as Hartman stated, “You can’t go anywhere in the Military and not find an acronym.”

To remember the proper steps to assist a battle buddy in the care under fire scenario, Cadets are taught M.A.R.C.H.

Cadets employ their knowledge by simulating a practical care under fire scenario where a situation is presented to them and they must react accordingly. 4th Regiment, Basic Camp Cadets learned and employed their knowledge July 20 during First Aid training during Cadet Summer Training at Fort Knox, Ky. | Photo by Madison Thompson, Cadet Summer Training Public Affairs Office

Cadets were also taught two other useful acronyms to use.

“We used the IFAK, which is the Individual First Aid Kit, and the AVPU, which stands for Alert Verbal Pain and Unresponsive,” stated Cadet Sierra Murray, Eastern Illinois University. “So, when doing the AVPU, that’s when you’re checking ‘hey, can you hear me? Can you squeeze my hand?’ That’s the Alert and the Verbal. Then, you go to pain. So, we put our knuckles to their sternum and then they should respond; and that’s how you know they’re alive and responsive. Then you can continue after that.”

“It does help. They definitely help for memory. Like, for the M.A.R.C.H., you can go through it in your head and that way you know that you’re going in order and doing it the right way. They definitely do help, specifically with memory and what to do next,” said Thompson.

After completing the training, Cadets felt more confident in their abilities to help others in case of a potential medical emergency. They also recognized first aid is an important skill to acquire.

“Personally, I think everybody should know how to do basic first aid because, if you don’t, you may be hiking with a friend and they may trip and cut themselves and you’ll need to put on a tourniquet,” said Hartman. “Someone could pass out and you need to know to check the airway because they may be choking or something like that. So, it’s definitely a good skill to have.” 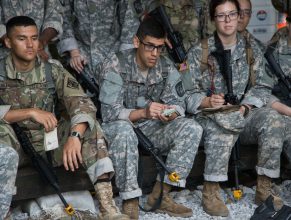 “I would say stay engaged and take notes when you can, especially for this part, so you’ll have something to reference when you leave,” said Murray. “Also, don’t be afraid to do it. There was a lot of us who forgot different steps along the way, but we weren’t afraid to get out there and we were eager to try and do it. So, if you keep that mindset and be confident with what you know, I found, personally, you’ll do better than just being fearful and getting in your mind.”

“Make sure you remember those acronyms, because there’s a lot of them,” said Hartman. “If you can remember them, they’ll help you a lot in the future.”