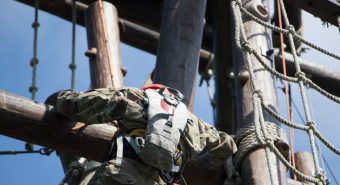 A Cadet uses upper body strength to pull themself onto a thick log of the Alpine Tower at the at the Forest Hills Climbing Course on July 19, 2019, at Fort Knox, Ky. | Photo by Matthew Barnes, CST Public Affairs Office

The course is composed of three different sections: a 55-foot tall rock wall comprised of nine lanes, two different alpine towers that stretch 40 feet high, and the Rudders High Ropes Course which has heights up to as 32 feet. Basic Camp Cadets have the chance to attempt each of these challenges.

The intent of this daunting set of obstacles is to help Cadets learn to work through their fears, to grow their leadership skills, and to build their self-confidence.

“The people who have these fears, they’re getting over them, and the people who don’t have the fears, it’s just increasing their confidence even more than it already is,” Cadet Alexander Chambarry, from Hofstra University, said.

Every Cadet attempts the obstacles with their battle buddy in their corner, guiding them along the process and voicing encouragement, which made facing their fears more bearable for some. 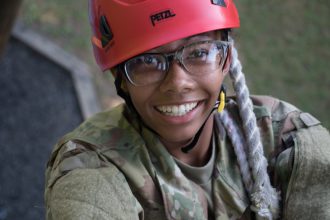 Cadet Alexus Williams, from Georgia Southern University, poses for a photo after climbing a cargo net to her final obstacle at the Forest Hills Climbing Course on July 19, 2019, at Fort Knox, Ky. | Photo by Matthew Barnes, CST Public Affairs Office

“I thought I would be a little more scared, but my battle buddy, he basically guided me and helped me get through the course,” Cadet Anthony Trecozzy, from Valley Forge Military Academy and College, said.

Each of the 12 stations is designed to test Cadets’ abilities in different ways. One station forces them to confront their fears by jumping off of a platform into a cargo net, while another station has them bolt through a row of wobbly square platforms.

“The slower you go on some of these things, your hands start to shake, you start losing your balance, but at the same time if you go too fast, you’re going to slip up and make a mistake,” Chambarry said.

The regiment is made up of both daredevils and terrified Cadets. Caroline Heltzel, a Cadet from John Carroll University, likes to think of herself as a mix of both.

“I’d definitely do [the Alpine Tower] again, but I’ll be just as scared the next time I do it,” Heltzel said. “I think it has definitely taught me to hang in there a little bit more than I usually do, and it’s helped me grow as a leader.”

If the course was successful in its mission, the Cadre can expect to see a new group of Cadets for the rest of camp: ones that can take on anything despite their fear.

Getting a Lay of the Land