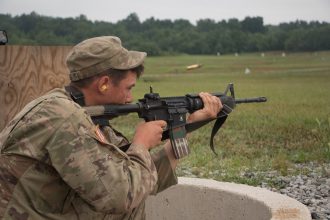 Cadet Erik Holm, from University of Portland, kneels in a foxhole to shoot from a kneeling position to qualify with his weapon. Cadets need to shoot a 23 out of 40 to qualify their weapon as part of Cadet Summer Training at Fort Knox, Ky., Jul 22. | Photos by Jordyn McCulley, CST Public Affairs Office.

To qualify on the M-4 rifle, Cadets must go through multiple days of training.

They start out at group and zero where they learn to group their shots together both with and without a laser. They then move on to qualifying the weapon.

Cadets shoot 40 rounds at different distanced pop-up targets. To make Marksman, they must hit the target at least 23 times out of the 40. Marksmanship is also the score they must achieve to qualify.

To make Sharpshooter the Cadet must score between 32 and 36. For Expert, they must score 36 or higher.

Although it is nice to have the title of Expert or Sharpshooter, just making Marksman is hard enough.

Cadet Williams Djepeno, from Morgan State University, was prior enlisted before coming into ROTC, and was an expert shooter.

Even so, Djepeno just shot 22 out of 40 this time around, and has to retake the qualification course. 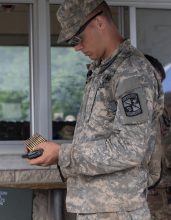 11th Regiment, Advanced Camp Cadet prepares to load his magazine before he qualifies. Cadets need to shoot a 23 out of 40 to qualify their weapon as part of Cadet Summer Training at Fort Knox, Ky., Jul 22. | Photos by Jordyn McCulley, CST Public Affairs Office.

“It’s not the end of the world,” said Djepeno. “I know what I am capable of and now I just need to get back on the range and do what I need to do.”

Weapons qualification is a frustrating event for some Cadets. Most Cadets have shot a weapon before but some have not.

For Cadet Bryce Liotta, from Bethel University, who has shot multiple times throughout his life didn’t pass the first qualification round either.

“I was angry, because I shoot a good amount in my spare time,” said Liotta.

Not passing the first time helps the Cadets learn from their mistakes.

“Not to be as cocky,” said Liotta. “It’s to go in and focus a bit more of a positive attitude.”

“Its not devastating at all, it just motivates me to be better,” Buckle said.