FORT KNOX, Ky. — Freshman and Sophomore Army ROTC Cadets stand in as the Opposing Force, or OPFOR, that play the enemy for Advanced Camp Cadets when they go through their different Field Training Exercises (FTXs). 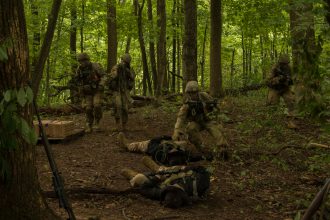 These first and second year military science students, also known as MS1s and MS2s, come from different ROTC programs from colleges across the country to help train this year’s Advanced Camp Cadets.

While they’re assisting training, these MS1s and 2s also get a chance to catch a glimpse of what’s in store for them in the coming years at Advanced Camp.

Cadet Kelsey White, from Kansas State University, will be an MS3 in the fall. She explained that coming to Fort Knox had been suggested by her Cadre.

“They said it was the best way to know what you’re going to be doing next year when you’re out in the field,” White said. “I know a lot of Cadets get nervous about it because we don’t get to do a full-size iteration like this in terrain and with blanks and the whole shebang.”

She added that it was cool to get to see what they would be doing next summer.

“I wanted to lift back the curtain and see the man behind it pulling the strings,” White said.

White, a Goodland, Kansas, native, mentioned that the training wasn’t strictly in the field. It went above and beyond, giving her and her fellow MS1s and 2s an overview of Advanced Camp as a whole.

“Our Cadre let us go with them and do the walkthrough while they teach the Cadets since this is the walk phase for all of the Advanced Camp Cadets,” White said. “We don’t really have off days, but when we get a day out of the field we’ve gone to EST (Engagement Skills Trainer) training, call-for-fire training and have been to the pop-up range to get the chance to qualify. So, we get a chance to do all the training that others may not have the resources to do.”

She recommended this experience to anyone, especially those who may not get the chance to go out to the field back at their universities.

Cadet Jarod Weber, another Kansas State University Cadet and MS2, added on to this by saying what he got to pull away from his time here.

“Yeah, we did some training at the range the other day, and to qualify next year we have to do a 300-meter pop up range,” the Leavenworth, Kansas, native said. “So, we got some practice and that really helped my skills with shooting. We’ll also be doing land nav [navigation] which will also help because we have to do a land nav course during Advanced Camp. All of that extra training really helps.”

Weber explained that this was his first choice for summer training and that he would also recommend it to anyone. 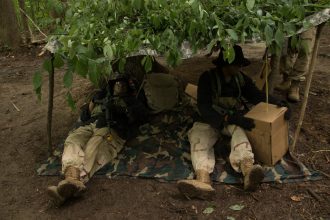 While training may be their mission, it doesn’t stop these MS1s and 2s from having fun and making friends.

“Yeah I’ve had fun,” Weber said. “We’ve been building a bunch of hooches, like sniper’s nests. We’re just having fun building stuff. But our main goal is to be out here to train the MS3s to the best of our abilities, and I’ve definitely made friends. We’ll keep in touch after we leave.”

Unlike the others, Cadet Caleb Wolterstorff, of Madesto, California, had other plans for the summer.

“I wanted to do a summer training event, and unfortunately I didn’t get to go to Airborne or Air Assault,” the Santa Clara University Cadet said. “So, I decided this would be a good way to be prepared for next year, and I’m having a great time while also learning a lot.”

From the basics to more specific tasks, Wolterstorff is preparing heavily for his turn at Advanced Camp.

Their time here may be spent helping train this year’s MS3s and 4s, but each of these Cadets have taken that extra step to prepare themselves for the following summer.

If you are having any second thoughts about what to do with your summer training; consider coming to Fort Knox and learn what’s in store for you at Advanced Camp.

Calm Before The Storm