“For CST, we have to complete several must pass events. Today was our final must pass event of CST and that was the 12-Mile Ruck March,” explained Cadet Jake Beretta, Slippery Rock University. “As a company, we marched all the way to the finish line from where we were placed out in Grizzly.” 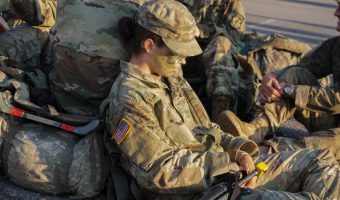 The road march was considered tactical for this event, which, according to Cadet Courtney Craig, University of Central Florida, means, “You should be three to five meters apart from the person in front of you and the person behind you. There’s going to be two different lines and you’re going to be on either side of the road and you’re going to be spread out like that. The main thing about tactical movements is keeping that spacing between people.”

“A typical non-tactical one would be us behind one another laughing and joking, everybody bunched up running and walking together. It’s really hard when you have 600 Cadets in a regiment, keeping them all spaced out properly without everybody slinking and getting close,” clarified Cadet Dylan Kannapell, Virginia Tech.

“When you keep it nice and everybody has a good three meters spacing, staggered columns one after another, it makes it a smooth march instead of stopping and going, stopping and going just because there are so many people. Also, the discipline and keeping everybody focused on the task at hand. I know everybody is excited and the Cadre are excited to be done, but that element of it just keeps everybody focused even though we’re about to be done.” 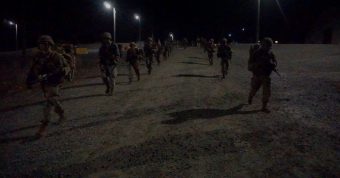 Cadets begin their 12-Mile Road March from their final FTX at Densberger to the finish line on Fort Knox’s base. Cadets walk along a gravel road tactically to ensure there is enough space in between them and the Cadet in front of them. 7th Regiment, Advanced Camp Cadets accomplished the 12-Mile Road March, July 23, during Cadet Summer Training at Fort Knox, Ky. | Photo by Madison Thompson, Cadet Summer Training Public Affairs Office

As they moved forward down the gravel, moonlit path for 12 miles in relative silence, Cadets had time to reflect and focus on motivating themselves and each other.

“I do a lot of thinking and singing songs. I sing some songs and I think about what are we going to do when we get here,” stated Cadet Devin Smith, University of South Carolina Upstate. “What are we having for breakfast? What is this next week going to look like? What am I going to do when I get home? The next school year coming up – anything to get your mind off of rucking for 12 miles.”

One Cadet considered a quote as motivation.

The purpose of the road march, according to Beretta, resides in one of the core lessons Cadre have instilled in Cadets since day one. 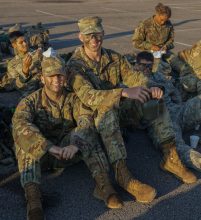 “One of the core attributes that we learn about and that we’re supposed to maintain is resiliency. Rucking for 12 miles at 2:00 a.m. after being in the field for 14 days straight would really show who can handle the resiliency and be an officer of the United States Army,” said Beretta.

Another Cadet concluded the ruck was a test of determination.

“I believe that the purpose of testing future officers in something like a 12-mile ruck march is to test us on our grit and our determination. It’s not easy. You feel pain in your back, your feet hurt, your knees are killing you, but it’s just one foot in front of the other,” enforced Craig.

“I believe that channels into so many different areas in the Army, not necessarily physical ones, but it really shows your test of will and not giving up. Everyone here did that today.”