FORT KNOX, Ky. – After a long and tasking 37 days, Cadets of the 6th Regiment, Advanced Camp, graduated this morning, July 24.

Advanced Camp puts MS3 (Military Science level 3) Cadets through over a month of trials and challenges that they are graded on. From the tactical to the instinctive, all skills are honed and then tested.

Lt. Gen. Stephen Fogarty, the commanding general of the U.S. Army Cyber Command and the guest speaker for this morning’s graduation, gave Cadets three things to keep in mind as they went their separate ways. 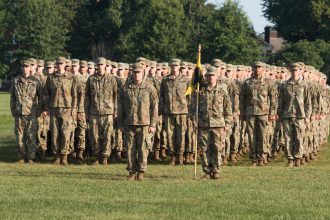 Do the right thing.

Take care of the troops.

Move to the sound of the gun.

At the end of the day, these are not only things Fogarty wanted the Cadets to always remember as future Army Officers, but are instilled in them during their time at Advanced Camp. 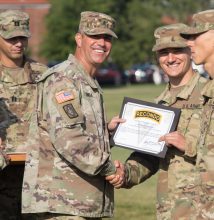 Now that Advanced Camp has drawn to an end for the 6th Regiment, Cadets are moving onto to bigger things.

“I’m going home to my school program, but I have an internship there,” Cadet Maxwell Batanian, a student at California Polytechnic State University, said. “I’m going home to all my friends who are waiting for me.”

Looking back on his time at camp, Batanian is proud of pushing through it and staying motivated. “Helping people and motivating others” was something he was driven to do during his stay, but is definitely ready to get back to his home program.

Cadet Matthew Berman, attending the University of Washington, is also going straight back to school to begin an internship. 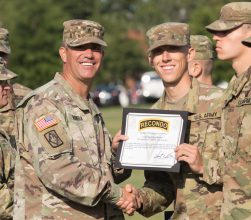 “I actually start a civilian internship tomorrow at 7 a.m.,” Berman said. “I was maybe a little bit enthusiastic about it, maybe I should have started it on Monday but I’m ready to jump into it.”

Not every Cadet is jumping straight into the next big thing, though.

Cadet Samuel Lim, from the University of California – San Diego, is taking two weeks with his family before heading back to school.

“I’m really relieved that it’s [Advanced Camp] is over,” Lim said. “But it exceeded my expectations for what camp was going to be like. I think my peers were really the ones that carried me through. I’m glad I came out to camp.” 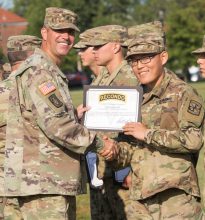 Lim said he’s been craving Korean pork belly, his favorite food, since he came to camp. He plans on it being his first post-camp meal.

Lim’s parents, who are an “inspiration” to him, were a big part of his motivation while he was at camp. He is thankful for the time he will get with them before leaving for his internship with his host school.

Batanian, Berman and Lim were all RECONDO recipients.

Now that 6th Regiment Cadets have graduated from Advanced Camp, their “final exam” of ROTC, there’s not long before they’ll be commissioned 2nd Lieutenants.

From here, some may commission in just a matter of weeks, while others will finish their last year of college before their commissioning.

Regardless, each and every one of them deserves a huge congratulations.

From Training to Training

How to make your Mark: Pre-Marksmanship Training