“We just went through the IMT lanes (Individual Movement Tactics) that’s basically you moving in the buddy system. The first buddy is supposed to yell out ‘Cover me while I move,’” explained Cadet Tanner Delphin, Northwestern State University. “They move and the other buddy is supposed to simulate cover fire and once that first buddy who moved is set, they’ll say ‘Set.’ Then the buddy who was laying down cover fire is going to say ‘Cover me while I move.’ Then, they’ll both move and be on the same line and they’ll both be set. They’ll continue the process until they reach the end of each lane.” 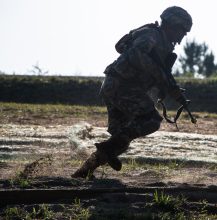 Basic Camp Cadets discovered new challenges and difficulties as they traversed the different lanes. One Cadet found communication to be the primary struggle.

“I think communication over the sound and getting your voice out is a problem because there would be times where it would be dead silent and other times you could yell, but other times you would have to scream to get the words out,” stated Cadet David Hudson, California Polytechnic State University.

Another Cadet found that ensuring a battle buddy’s safety and checking personal safety was a challenge worth addressing.

“I think the most difficult thing, since I’m right handed, was being able to position my rifle so that I’m not flagging my battle buddy to my left,” stated Cadet Tyreanna Dumas, Grand Canyon University.

Concern about a battle buddy demonstrates one of the core values of the Army – teamwork.

“I think the whole organization exists because of teamwork. Without teamwork, everyone would be doing their own thing and nothing would ever be done properly,” emphasized Cadet Jose Mata, University of Texas at Rio Grande Valley. “So, we get a bunch of minds together, we work it out, and we execute it or proceed to whatever objective we have planned. It’s all about teamwork.” 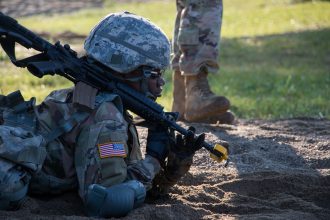 Cadets were prompted about this sense of teamwork and group effort to work together. After consideration, they responded in how they are currently contributing to the Army team. One Cadet found that helping as needed went a long way.

Another Cadet found that a contribution might not be seen immediately and that it is through learning and absorbing information that they contribute greatly. 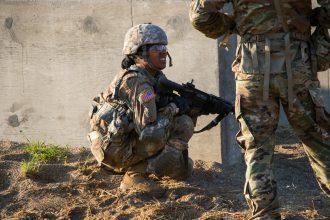 “Honestly, just make sure you listen to the instructions. Everyone’s here to help you. They’re not here to wean you out,” said Dumas. “They’re here to build you up. So yeah, there’s going to be some hard points, but if you can mentally get through it, then that’s on you. Everyone around you is going to be supporting you, it’s just a matter of what you can do personally.”

Cadet Jada Graham, North Carolina A&T State University, encouraged future Cadets to, “Make sure you have confidence. It’s okay if you mess up. There are people around that will help. Stay strong.”

On another note, Hudson said, “Stop counting down the day. There will be some boring days and there will be days where you’re doing something the entire day and you’re going to be tired. Just take every day as it is, learn, be motivated, get through it, because you can choose your attitude. You choose to show up in the morning. You chose to be here. Why not make the most of it?”