FORT KNOX, Ky. — US Army Medics from across the country took part in a validation exercise to stay prepared in case anything should happen during Cadet Summer Training (CST). 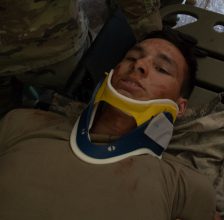 The training today, July 24, 2019, focused on validating the steps medical personnel have in place when a patient needs evacuation. This scenario found four soldiers badly wounded after a truck had flipped and each soldier launched onto the side of the road leaving them in dire need of help.

Medics who arrived on scene had to make sure the patients on the ground were taken care of, while those that need to be evacuated were taken to a location where they can get the proper treatment.

Lt. Col. Samuel Fricks is the Task Force Med Commander over all Medical Assets for CST 2019, and was also one of the officers overseeing the training. Fricks outlined all of the elements that went into the training today to make sure it felt exactly like the real thing.

“We had patient with moulage, so they looked like they had real injuries like a bone sticking out of their leg,” Fricks said. “We had a vehicle out there because it was supposed to be a roll-over accident. Then the role-players were trained to respond a certain way and act a certain way to stress the medics. This is as real as you can get.”

These role-players were actually US Army medics themselves, but they weren’t the only ones who came to assist with today’s training. 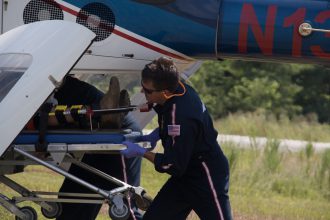 Kentucky-6 Air Methods workers lift up the stretcher holding a casualty and roll it into the helicopter. | Photo by Matthew Barnes, CST Public Affairs Office.

Making sure those that are severely injured are given the proper aid is not a one-person job, which is why this training is so important.

Fricks added that after the 28th of July, 2019, the dedicated Army Helicopters will be leaving. So, this exercise gives the civilian air evacuation team, the Kentucky 6 Air Methods team, a chance to see what the proper procedures are because they will also be the primary responders.

The military side of assistance in this exercise included US Army medics like Sgt. Dakota Navrath who acted as one of the injured men. He is also someone who has been to the field and could give better insight for the medics here at Fort Knox.

“I got the opportunity when helping privates in Afghanistan to treat a couple of ANA [Afghan National Army] soldiers in the Afghan Army,” Navrath said. “So you get to see then how someone reacts in that real life instance, and you can incorporate that when trying to give soldiers the best training you can.”

Navrath explained that this kind of training is done all of the time, and noted on how he thought the medics did during the exercise. 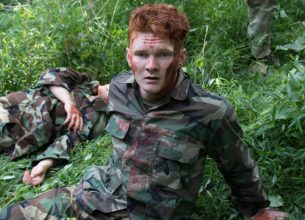 Sergeant Dakota Navrath plays one of the wounded during the MEDEVAC exercise. | Photo by Matthew Barnes, CST Public Affairs Office.

“I think they did very well,” Navrath said. “They stayed calm but at the same time hurried. They didn’t mistreat anyone. I don’t know what I’d tell them to do differently.”

One of the medics who arrived on the scene was Pfc. Brayden Powell, a medic for almost a year.

Powell said that this training reminded him a lot of the Advanced Individual Training he did in Texas, but that this exercise turned up the pressure.

“Each patient had different injuries,” Powell said. “We had to evacuate one patient immediately, which took my other medic. So, it was just me and the three injured soldiers. I had to communicate with all three of them, monitor them, make sure they aren’t passing out, get all of their information down and also make sure that I’m properly treating them at the same time.”

Stressful indeed, but, as Sgt. Navrath pointed out, Powell and the others were able to keep a level head and treat everyone efficiently and quickly.

Despite everything going fairly smoothly, Powell reflected on the training later and found different areas he would like to work on in the future. 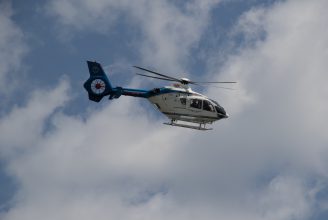 An emergency helicopter soars through the air to retrieve the injured soldier. | Photo by Matthew Barnes, CST Public Affairs Office.

“A couple of things I could’ve worked on were communication with my other medic, as well as working on my tunnel vision,” Powell said. “I would zone in on one patient and treating them forgetting that there were two others patients. I could definitely work on that. Things I did well or excelled at; I was communicating well with my patients, making sure they were awake and alert. As opposed to me working in my head, where I wouldn’t know if the patients were passing out or asleep.”

Powell said that this sort of training doesn’t keep them from taking care of patients that occur outside of these exercises. Always alert and always ready to help, the Medics are always learning to make sure they can be ready when the call comes.

Back to the Basics

Learning Leadership from “The Most Hated Unit in the Army”