Similar to the Field Leaders Reaction Course (FLRC) at Advanced Camp, these objectives are impossible to complete alone. Cadets were briefed on the situation at hand, were given a few materials (such as wooden boards and ropes) to work with, and typically had to transport the team from one side of the obstacle to the other without touching any forbidden areas. 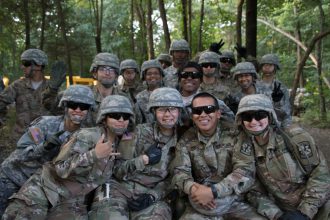 A large group of Cadets pose for a team photo before they tackle their objective. | Photo by Matthew Barnes, CST Public Affairs Office.

At the FLRC, a new Cadet is assigned as squad leader for every individual challenge, putting them in a situation of focusing the group and making tough decisions.

With the TDC, however, no specific person is given authority; typically, a few Cadets step up on their own. Sgt. 1st Class Ryan Neely, a Drill Sergeant attached to the 4th Regiment, thinks this is a way to gauge leadership qualities in his group.

“This is where you are going to see the leader evolve,” Neely said. “Don’t put anybody in charge and just see what happens.”

One of the most intricate steps of taking leadership is deciding on a plan of action for the group. Everyone wants to feel heard, but not every idea ends up being used.

“You have so many people all coming up with different ideas and speculations, so you all have to come across one whole idea together as a group,” Cadet Sherise Sharpe, from Old Dominion University, said. 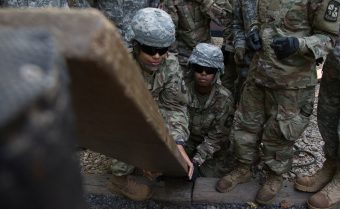 Two Cadets work together to stabilize a board on the closest platform to them. | Photo by Matthew Barnes, CST Public Affairs Office.

Each objective has a time limit of 20 minutes, and considering how strenuous each one is, Cadets rarely beat their obstacles. However, the Cadre are looking less at who is victorious and more at who handles adversity and pressure the best. To Jack Moody, a Cadet from the University of Massachusetts-Amherst, the course is effective at fulfilling it’s designed purpose.

“The platoons and squads are getting a lot closer and a lot more confident and secure in each other, and trusting each other more, which is really important,” Moody said.

When their backs were against the wall, most of the teams stayed calm and figured out new plans on the fly. One thing Neely noticed at the TDC was the toughness of his regiment.

“These people are hard to break, and that’s okay,” Neely said. “We like motivated people; it makes our job easier.” 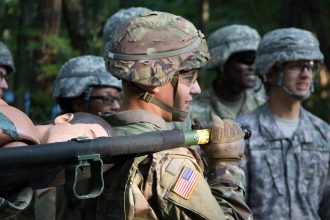 A Cadet pitches a litter over his shoulder with a casualty on it. | Photo by Matthew Barnes, CST Public Affairs Office.

4th Regiment has already been at Fort Knox for a little over two weeks, so many relationships between battle buddies have already formed. Despite this, the TDC added a whole new dynamic to the platoons for the rest of camp.

“I think the Army invests in these courses to help bring people together and have a tighter bond,” Cadet Harold Hill, from the University of West Florida, said. “It’s better to get ideas from everybody on a squad or team, because if you have just individuals, you’re not going to go anywhere. It’s all about being a part of a team, and that is what the Army is all about.”