FORT KNOX, Ky. — With graduation growing ever closer, Cadets spent today, July 26, 2019, learning about where they will be going once they receive their commission. 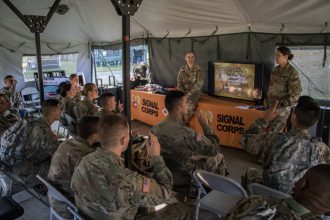 Branch Orientation allows Cadets an opportunity to ask questions and learn all they can about their preferred branches. However, if they want to branch out and learn about others groups in the Army, they are more than welcome to explore to find new interests.

Cadet Miurel Hamburger, of Miami, Florida, came to today’s training with a whole host of questions about her preferred branch and was able to find out all she needed to prepare.

“I actually learned a lot because I’m only a sophomore and a rising junior,” the University of Kansas Cadet said. “So I didn’t know a lot coming in about the nursing corps. I learned that I’d have to be a medical, surgical nurse coming in, which was a big deal.”

Hamburger added that she didn’t have any other particular interest outside of nursing, but thought she would take the opportunity and check out the other branches present.

Cadet Anaisa Cruz, of Chicago, Illinois, was with Hamburger and also looking into the Medical Services for nursing. 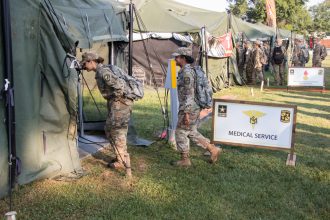 “I learned everything I could because I came in with little background knowledge,” the University of Illinois at Chicago said. “Our brigade nurse keeps changing so I don’t get to talk to them, but now I know what I need to do after I graduate.”

Cruz mentioned that although she was focused on becoming an Army nurse, she also wanted to check in on Military Intelligence.

She said that she was originally a double major in criminology, and, with two more years of schooling, she said she might consider that route as well moving forward.

For Cadet Nick Barden, from Clarkson University, looking to the future is one of the main draws to Branch Orientation.

Barden, someone wanting to branch Aviation or Armor, agreed with the idea that this was a good time to ask questions about his plan going forward. 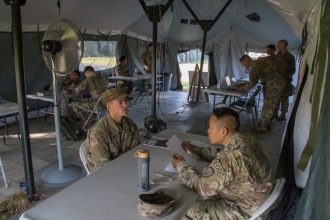 After learning about their preferred branch, Cadets get a chance to interview and see how they fare at Fort Knox, Ky., July 26, 2019. | Photo by Jacob Hempen, CST Public Affairs

“So, I know for Aviation specifically, I was really looking to see a timeline,” the South Glens Falls, New York, native said. “Paperwork and the other things needed for branching. With Armor, I was looking into what kind of units I could join in. Any general information that is helpful.”

Barden explained that he learned a lot about the other branches and wanted to check out as many of the tents as he could. Because, as he put it, this is a real turning point.

“This is a point of realization that we are going to be in the real Army soon,” Barden said.

While the Cadets may be in the Army soon, all of them realize that there is still more work to be done after graduation. Especially Cadet Brandon Butcher, of Springfield, New Hampshire, who wants to branch Infantry, but is using Branch Orientation to broaden his horizons. 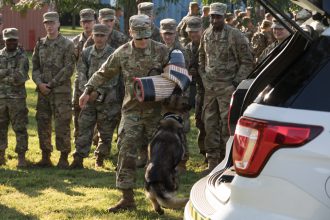 Cadets are given a demonstration of how the K-9 unit operates as a part of the Military Police at Fort Knox, Ky., July 26, 2019. | Photo by Jacob Hempen, CST Public Affairs

“So far I’ve learned a little bit about EOD [Explosive Ordinance Disposal] which raised my interest,” the Clarkson University Cadet said. “So I’m going to go in and interview to see where I fall.”

However, that isn’t the only place Butcher is looking to improve when he leaves Fort Knox and continues his Army journey.

“I know where I fall in the leadership development and how I want to get better so I can help those under me improve,” Butcher said. “So that they can be ready which will also help improve myself.”