FORT KNOX, Ky. – Many Cadets join the military to carry on the family legacy. One such cadet is Ian House.

House’s family history with the military goes back to the Revolutionary War and currently extends to his father and brother who are serving in the Navy.

“My dad served for 21 years, my brother is serving right now and I’m here serving,” the Snohomish, Washington native said. 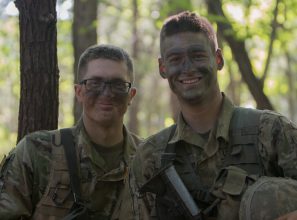 For a majority House’s life, his father was a Naval Aviator, but for all of his life he has been a part of the military family. This wasn’t the only reason for his decision to join though; the Cadet also relished the chance to grow closer to his dad and brother, carrying on the family pride.

“For me, it is continuing the cycle because this is the family business,” House said. “I am here because I want to be here, I want to serve my country and I want to forward this tradition and keep it going.”

At 17 years old, the Eastern Washington University Cadet decided to try to enlist. House soon found out that this task would be harder than he expected.

An issue with his Military Entrance Processing paperwork barred House entry in every branch of the military.

Feeling discouraged and overwhelmed, House took a break and got a job.

“I had just finished high school and I took some time off because I was so burnt out,” House said. “I was working for a about a year and a half, and I was going nowhere and I realized that.”

House didn’t see a change in his story until he got some helpful advice from his parents.

“My parents were like, ‘Hey, just go to college and try it out. Look at ROTC, you might be able to get on there.’ I figured this was my last chance to get into the military; every other option was already exhausted,” he said. 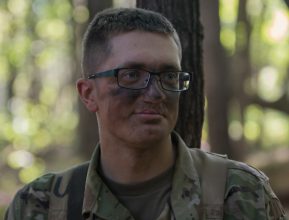 Wanting to not regret taking every opportunity to try to join, House enrolled in Eastern Washington University and appeared before a doctor to complete the Department of Defense Medical Examination Review Board process. He was cleared and accepted into the Reserve Officers’ Training Corps (ROTC).

“That was probably one of the best days of my life honestly,” House said.

Upon receiving this information, House was excited to jump ship from his Navy family and started working towards commissioning as a 2nd lieutenant in the Army.

What followed next though, is what House truly cherishes.

“My dad swore me in and it had been an almost four-year journey trying to get into the Army and now I’m here,” House said.

Not only did his dad swear him into the military, but House’s father will also commission the Cadet this upcoming May.

Until then, House is focused on completing Advanced Camp and graduating with his regiment, Aug. 8.

“It is amazing and a dream come true really,” House said. “I’ve had this dream since I was 16, so to have it finally realized, it is a fantastic feeling. I don’t think anything really compares to it.”

Marching to the Beat