Fort Knox, Ky. – The only noises that could be heard this morning from the woods of AO Panther, were the chirping and humming of birds and bugs. And machine guns, as the raid began.

Cadets from 9th Regiment, Advanced Camp spent the morning conducting a raid during the Panther portion of their Field Training Exercise (FTX). 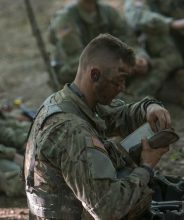 During the After-Action Review (AAR), a 9th Regiment Advanced Camp Cadet looks at his notes so he can give feedback about the raid his squad conducted at Fort Knox, Ky., July 26. | Photo by Matthew Billiot, CST Public Affairs Office

During the FTX Cadets have the opportunity to rotate through various leadership roles while being assessed by Cadre. Some of those roles included Platoon Leader (PL), Platoon Sergeant (PSG), Squad Leader, and Team Leader.

Cadet Aedon Hann, from the University of New Mexico, served as the Platoon Leader for the raid mission, this meant Hann was responsible for the planning and execution of the task.

Hann said his biggest challenge was communication and working with fellow Cadets in their various leadership roles.

“My biggest challenge in this role was managing the five or six squad leaders that were around me,” the Albuquerque, New Mexico, native said. “They all had great ideas but at the end of the day we could only choose one idea. [The challenge] was just getting everyone on the same track.”

Hann also learned the importance of trusting his team to do their jobs.

“[I learned to] trust my team leaders and squad leaders,” Hann said. “We had gone over the brief many times, they had briefed it to their soldiers so I felt like they had a pretty good idea of what the plan was and I was able to trust in them to execute.”

The role allowed Hann to explore different leadership styles and learn strong leadership qualities to take with him in his future.

“[To lead as a] PL and PSG, [you] have to be able to listen to their people and be able to place people in the right job that they will succeed at,” Hann said.

Cadet Ian House served as the Weapons Squad leader for mission; this meant that he was responsible for the weapons and support by fire line.

“I think it went pretty well, we had a weapon jam about 10 seconds into the actual iteration but we got that figured out and just rocked and rolled,” The Snohomish, Washington, native said. “We made sure the assault line could do their job.”

During his time in leadership, House said he grew to be very proud of his team.

“I am really proud of my gun teams, they stepped up today and made sure the guns were ready to go,” the Eastern Washington University, Cadet said. “We had people firing while [others] were reloading. We had a really solid support by fire line today. I couldn’t have asked for anything better really.”

During his time in leadership House learned the importance of good communication and decision-making skills.

A 9th Regiment Advanced Camp Cadet talks with other members in his squad after defeating all the OPFOR during a FTX raid at Fort Knox, Ky., July 26. | Photo by Matthew Billiot, CST Public Affairs Office

“The good qualities of a leader that I had to display were communication as well as mental agility, being able to make that decision on the fly, and maybe adjust the plan that I had,” House said. “At the same, being able to listen outside recommendations and come up with the best plan from that.”

House gave advice to the next two regiments as they prepare to begin their FTXs.

“Be flexible as a squad leader,” House said. “You don’t know if you are going to be sitting on a security line or sitting with the support by fire, or even assaulting the objective. Be ready to fill any role that you are given. Don’t get complacent doing the same thing because they can always switch it up.”

Cadet John Rust from the University of Texas at San Antonio, acted as the Assault One Squad Leader.

Upon learning of his role, Rust prioritized the motivation of his squad as his main objective.

“To be a squad leader, especially during a raid, you must make sure there is violence of action at all times. Motivation is key when you are trying to accomplish the mission,” the Woodlands, Texas, native said. “If I can do my job as a squad leader and ensure that when my people are on line and ready to assault through the objective, that they are motivated while remaining competent and highly effective in what their job is, that is huge. I have done a good job as a squad leader.”

During his time as a Squad Leader, Rust quickly hatched a plan to overcome some of his personal struggles during FTX exercises.

“Once we got on line, reminding ourselves we had to spread out and that there are still actions on the objective gets difficult,” Rust said. “Everyone gets wrapped up in bullets flying and loud noises. It feels like a real war zone, and now you have to say, ‘I still have a responsibility to do, the mission is not over.’ That is hard for me.”

Despite having some struggles, Rust was able to keep the mission in mind and lead his squad to complete the task.

“Knowing what your challenges are, that is great, it is a big part of overcoming those obstacles,” Rust said. “Telling my people beforehand to remember that the mission is not over until everyone screams ENDEX is huge.”

It’s Not About Being First