“You will fondly remember your squad leaders and team members who helped you succeed here at Fort Knox, while you battled the ticks, the bugs and probably even the occasional snake,” said Maj. Gen. Donna Martin. 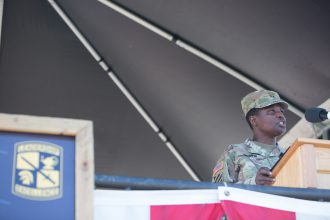 Martin is the commanding general of the Maneuver Support Center of Excellence and Fort Leonard Wood, and was the guest speaker during the graduation.

When Cadets arrived 26 June, many of them had no military experience and after 31 days they have learned all of the basics they will need to succeed at Advanced Camp when they return to Fort Knox next year.

For many of these Cadets, Basic Camp has served as an avenue for them to advance their military knowledge and expedite their military science placement, allowing late entry Cadets to join later than their freshman year and still graduate on time.

Cadet Kenneth Graeff, Monmouth College, received the Company Commander Hip Pocket Scholarship of 48,700 dollars and had never been to a military ceremony before.

“It honestly feels amazing to finish basic camp,” he said, “and this is the cherry on top and the check is extremely nice and humbling.” 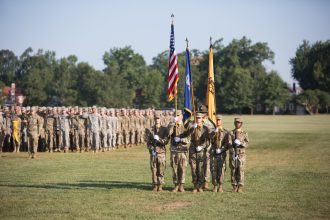 “I was just so proud of everyone,” she said. “It feels very accomplishing to have been through all of this training and it really pays off in the end.”

Martin closed here speech reminding Cadets to ask questions, respect their Non-commissioned officers and to also do their homework.