FORT KNOX, Ky. — On July 29, another regiment entered their final stage of the lengthy Field Training Exercises (FTX). 9th Regiment completed their first lane of AO Grizzly, which is the most challenging phase of the FTX due to the lack of Cadre assistance.

However, this doesn’t mean the Cadre were just standing around. They were filling out Blue Cards, which is the Army’s way of evaluating Cadets. 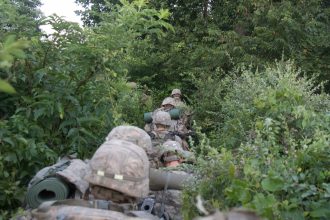 Cadets walk in a file formation to get into the woods. | Photo by Matthew Barnes, CST Public Affairs Office

“Today we are watching key leadership, which is Platoon Leader (PL) and Platoon Sergeant (PSG),” 2nd Lt. Zane Knight, a Cadre member out of Campbell University, said. “Mainly, we are looking for key leadership attributes and competencies. We want to see how they can react under the stress of running a live mission.”

Cadets are familiar with the content on the sheets, because at the beginning of camp, it is broken down for them.

“It is a good platform,” Cadet Mackenzie Haley, from the Virginia Military Institute, said. “It allows for some flexibility, but still keeps a standard for what we should be graded on. And we know what they’re looking for, so that’s helpful; it’s like having a rubric for a group project.” 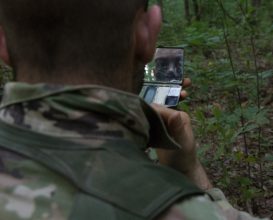 The morning mission was a Recon/Attack, where the group leaders located the enemy base and scouted it out, brought that intel back to the rest of the platoon, and then they all invaded it together. Despite a faulty route costing everyone time in the beginning, the overall mission was successful.

“I think the platoon rolled pretty well,” Cadet Trea Sargent, the mission’s platoon leader from West Virginia University, said. “When you make a plan, you have to be able to be flexible. You can’t make the perfect plan; you have to make one that works 70% and you figure out the rest of the 30%.”

Sargent will be shown his evaluation from his stint as the platoon leader later in the evening, and the results of the cards can alter a Cadet’s future. Good scores can lead to higher rankings in the platoon, and can also give Cadets a better chance at landing the job they want in the Army. 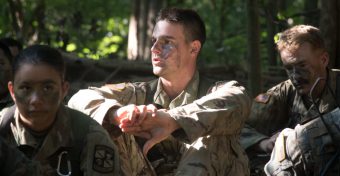 A Cadet listens to the feedback being given on his platoon’s mission during the After Action Report (AAR). | Photo by Matthew Barnes, CST Public Affairs Office

There are six Blue Cards per mission, and the regiment still has two full days of missions to go. Knight has been attached to this group through all of camp, and he has high hopes for their future at AO Grizzly.

“The platoon is very close; they work very well together,” Knight said. “I’d like to see them complete the missions with proficient or better ability.”

Attention in the TOC