With a plane full of anxious Cadets flying towards their connection in Amsterdam, with a final destination of Hungary for the Cadet Coalition Warfighter Program (CCWP), no one expected a flight attendant to ask for medical personnel over the intercom. However, for Cadet Jerrod Fedorchik from South Dakota State University, this call brought him to his feet, and without hesitation, he ran towards the back of the plane. 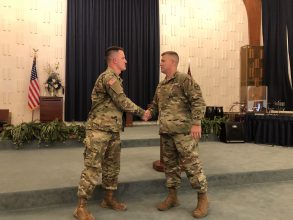 Cadet Jerrod Fedorchik (left), gets recognized in Hungary during CCWP 2019.

They were twenty minutes from landing, and Fedorchik discovered the reason for the urgent announcement – a nineteen-year-old girl had collapsed in the plane’s bathroom.

“She was starting to come back to, but she had passed out,” said Fedorchik. “I picked her up, we got her out of the bathroom, and we sat her down in the back of the plane.”

What nobody knew yet, was that Fedorchik became an EMT his senior year of high school, and he was used to responding in situations like this.

In the back of the plane, he asked for their medical emergency kit. He was handed a blood pressure cuff, a stethoscope, and a thermometer. Fedorchik proceeded with his assessment.

“Her blood pressure was super low, ninety over sixty,” said Fedorchik. “I determined that she was hypovolemic because of dehydration.”

There were now ten minutes until touchdown. She needed the fluids in her body replenished, and luckily, they had an IV and saline on hand.

“I got an IV from the attendants, and I started an IV. I tried to do one on her hand, but since she was small and dehydrated, she had no veins.”

He tried higher up on her arm, and thankfully, got a vein.

“I started her on 2 liters of normal saline, and then just stabilized her for the rest of the flight.” They wrapped her in a blanket so she could warm up, gave her water and oxygen, while simultaneously coordinating with the ground crew.

“On the ground, I did an EKG (Electrocardiogram), attached electrodes, helped the medics with their assessment, and then went on to the rest of our trip.” 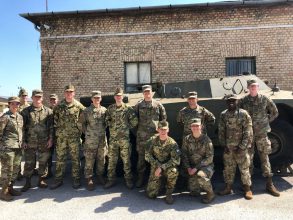 It was quite a start to his CCWP experience, but Fedorchik’s streak of leadership didn’t stop once he reached Hungary.

“When I found out I was going on the mission, I took it upon myself to take thirty minutes every night, and read up on the culture.”

He started with history, and then geography, and even moved towards learning the Hungarian language. Because of his commitment to familiarizing himself with the culture, Fedorchik found himself quite prepared for what was to come. “It helped me hit the ground running when I got to Hungary.”

When the group of Cadets didn’t have a translator with them, Fedorchik pieced things together for the group, and stepped in as a translator.

“Even saying, ‘excuse me, could I have some more water please’ at a restaurant in Hungarian, and watching the waiter’s eyes light up, that’s what it’s all about,” said Fedorchik as he spoke of what he learned from the program. “I got a lot out of this program as a Cadet, and as a future leader.”

On the ground and in the air, Cadet Jerrod Fedorchik has prepared himself for what life throws at him, and on that plane flying over the Netherlands, he exemplified leadership excellence under pressure.