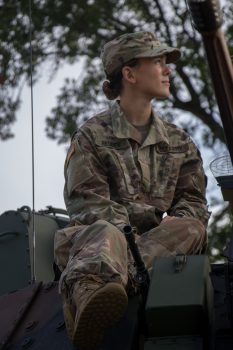 Cadet Kathleen Reuber, from Wright State University, talks with Cadre members while sitting on a tank, July 31, 2019, at Fort Knox, Ky. Cadets from 8th Regiment Advanced Camp prepare for commissioning by spending the day In Branch Orientation at Keyes Park learning about the various branches of the Army. | Photo by Amy Turner, CST Public Affairs Office

Cadets from 8th Regiment, Advanced Camp prepared for commissioning next May by spending the day learning about the different Army branches and the opportunities they each provide.

Along with insight from branch officers, Cadets were also given the opportunity to see and get hands-on with equipment.

Throughout the Cadets found themselves surprised by all the branches and some of the opportunities they may have not been aware were open to them.

“There are people like me who went to school to play lacrosse and find ROTC is a calling for them,” Cadet Chase Kipke, from Minneapolis, Maryland, and a student at Salisbury University, said. “They don’t know anything about the military. I have learned a lot, I have learned of more branches than I knew about yesterday or the week before, where I know what I want to do with my life in military service.”

Cadet Madison Montchal, from Iowa City, Iowa, appreciated the opportunity to see a branch outside of the infantry.

“I feel in in ROTC a lot of times since we train so much with infantry tactics getting for camp, you only see the infantry side of things, so you don’t really get to learn about the other opportunities and branches,” the University of Tennessee at Martin Cadet, said. “Here you really get to dig in and see different branches and see where you fit best.”

Cadet Elle Rowe from Finlandia University, had previously experienced the orientation but still learned more during her time today. 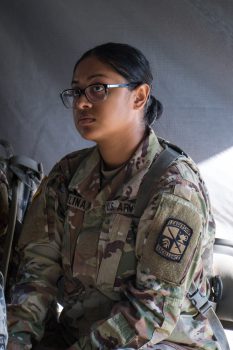 Cadet Elizabeth Molina, from California State University at Fullerton, listens as Cadre from every branch give briefings on life and jobs in their branch, July 31, 2019, at Fort Knox, Ky. Cadets from 8th Regiment Advanced Camp prepare for commissioning by spending the day at Keyes Park learning about the various branches of the Army. | Photo by Amy Turner, CST Public Affairs Office

Kipkie even found his branch priority list completely changing after just a few sessions.“For me, I really wanted [to branch] transportation but coming out here, I noticed that there are so many different branches that the Army offers, I might be changing that,” Kipke said.

Not only was Kipke surprised by his change of heart in branch preferences but also in how thorough the entire experience was.

Center of Influencers take a leap of faith