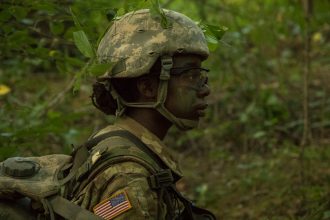 Cadet Monaesha Hamilton, Hampton University, pulls security at the patrol base while others in her platoon scout out the area, planning for an ambush. Fort Knox, Kentucky, July 31. | Photo by Megan Reynolds, CST Public Affairs Office

AO Wolverine presents Cadets with the “crawl” portion of their time in the field; Panther will be their “walk” stage, Grizzly, their “run.”

Each stage gives Cadets different benefits, honing skills they previously had and gaining new skills in the process. The crawl portion grants Cadets the most help from their Cadre.

Crawling is a Necessity 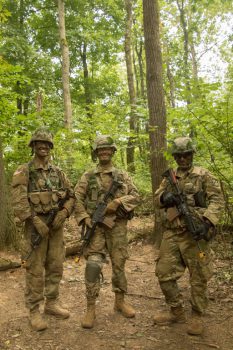 Crawling is needed, and Burgess wasn’t the only Cadet who found truth in that statement.

“By going slowly first, you can see how it’s done right,” Cadet James Hickey, from Alexandria, Virginia, said. “Then you can move into being more independent and making your own decisions.”

Hickey, attending Michigan State University, said that going slow gives the platoon leader a chance to try different things; on top of that, he said the lane-walkers are able to step in and offer any advice they can during the crawl phase.

The slowness of the crawl stage isn’t something to be scoffed at. Cadet Seth Henry, a native of Pea Ridge, Arkansas, has found the slowness to be one of the most beneficial parts.

“It [the crawl stage] runs a lot slower than a normal mission,” Henry, a student at Brigham Young University – Idaho, said. “They give us a little room to make our own critical decisions, but there’s a lot of assistance from the instructors.”

Henry said that the slowness of the crawl stage and the critical thinking aspect of a mission go hand-in-hand; the Cadre are working to make the Cadets “disciplined subject-matter experts” on field training exercises. 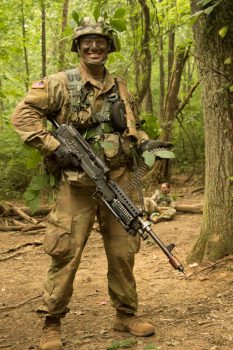 The slow pace of the crawl stage allows Cadets to really drill home the steps and the skills developed in the FTX.

While some found the pace to be the most beneficial part, others found the Cadre participation to be of more use.

“In the crawl stage, Cadre are here if we have questions,” Cadet Ryan Gervais said, who calls Griswold, Connecticut home. “They want us to make our own decisions, and to lead how we’re going to, but if they see that we’re doing something wrong, they’ll step in and correct it.”

The University of Maine student said that the Cadre not only step in during wrong-doings, but offer advice on different ways to complete missions.

Keeping Your Head Up

Despite the excitement that many Cadets find in being in the field, there is still a lot of the “hurry up and wait” aspect that much of the Army seems to carry with it.

So, Cadets have all found their own ways to keep their attitudes positive, not allowing their head to sink. 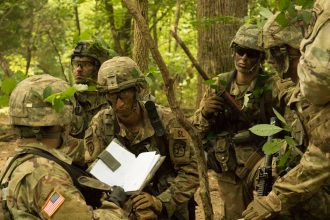 Cadets set out a plan for an ambush after scouting out the area around their patrol base. Fort Knox, Kentucky, July 31. | Photo by Megan Reynolds, CST Public Affairs Office

Burgess keeps his positive vibes flowing to those around him, and wants his family to know that he’s “having a good time out here, whether you think it or not.”

Still others, while not lucky enough to find candy in their MREs, found joy in other things.

“I just remember that there’s people back home rooting for me,” Hickey said, when asked what he keeps in mind while he’s out in the field. “I’ve got some great people that I’ve met out here.”

Hickey said that if there was anything he could tell his family back home, it’d be, “I’ll be home soon.” 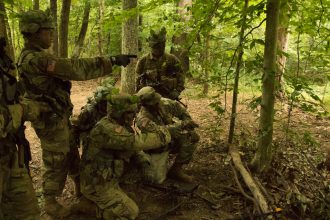 A Cadre member utilizes a teaching moment, showing his Cadets how to properly hide a weapon behind cover during an ambush. Fort Knox, Kentucky, July 31. | Photo by Megan Reynolds, CST Public Affairs Office

Hickey was not the only one thinking of home.

“I love my wife and I love my little girl,” Henry said.

Henry said thinking of his family and remembering that he wasn’t out in the field alone helped him push on. The field has “a lot that sucks,” so he just focuses on the people he’s going through it with.

Thinking of going home is what gets Gervais through his days.

“I keep in mind that it’s not forever,” Gervais said. “I’m coming home soon. Looking forward to seeing them [his family].”

Cadets finished their first day in AO Wolverine today, so there’s still quite a bit of field time ahead of them. Once they finish here, they move on to AO Panther, which will start their walk phase.

From Wolverine, to Panther, to Grizzly, it all points to graduation, something each Cadet is looking forward to.

Faith in the Fundamentals

Cadets Pop Up on the Range