FORT KNOX, Ky. – “You made it. You can be justifiably proud of your accomplishments this past month,” said Gen. Paul E. Funk II, August 1. 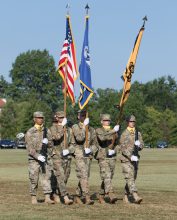 A color guard made up of select 3rd Regiment, Basic Camp Cadets holds the colors while marching in the Pass In Review during graduation at Fort Knox, Ky., August 1, 2019. | Photo by Mary Kate Griffin, CST Public Affairs Office.

“Your training is far from complete,” Funk told the Cadets. “My promise to you, as the TRADOC commander, is that we will maintain a laser focus on preparing you to be warriors and leaders that soldiers deserve.”

In his commencement speech, Funk offered the Cadets some leadership advice that he had extracted from his own experiences over the course of his Army career. Funk’s final piece of advice compared leadership to a contact sport.

Micheal Ortega Bernard, a Cadet at the University of Puerto Rico-Mayaguez, was able to attest to Funk’s experience because of his own at Basic Camp.

“It’s important to be in contact with your subordinates, platoon and company,” said Ortega. “I believe that the hands-on experiences at camp have prepared me to be a better leader [in that regard].”

In addition to feeling empowered to take on the remainder of their military careers, Cadets experience feel relief and excitement at the conclusion of their summer training.

Cadet Cristian Ortiz Feliciano, attending the International American University, said that he was experiencing a combination of emotions upon graduating camp.

“I wish my family could have been here to see me graduate but they were busy working in Puerto Rico,” said Ortiz. “I feel like they are going to be so proud of me when I return. No one in my family has military experience.”

Apart from wishing to see his family, Ortiz said he also felt a great sense of accomplishment after completing his Basic Camp training.

“I decided to challenge myself and prove to myself that I have the competence and confidence to graduate camp,” said Ortiz. “I have always struggled with self-confidence but I was able to graduate.”

A Little Bit of Chaos