FORT KNOX, Ky. — Every Cadet comes to a point where they may not be able to push any further, but, as the Basic Camp Cadets learned, that’s when the motivation from those behind them can push them beyond their limits.

The Obstacle Course 6th Regiment took on today was filled with challenges of varying difficulty, that tested the Cadets physical and mental abilities. After they completed all of the obstacles, Cadets took a moment to reflect on what they had faced and how they were able to push past those difficulties.

Cadet Lacy Pemberton, from Virginia Wesleyan University, said that the rope climb was the most challenging obstacle, and that it, “gets me every time.”

“It requires a lot of mental focus,” Pemberton said. “Moving your hands and feet at the right times, otherwise you can’t make it up”

However, Pemberton said that her squad made sure to keep everyone motivated and moving, so she was able to face the rope with fewer worries.

Cadet Jacob Manning, of Dandridge, Tennessee, also found the ropes challenging, but for a different reason than Pemberton.

“You just couldn’t grip the rope,” the Middle Tennessee State University Cadet said. “Every time I jumped up and tried to grab the rope, I would slide off of it.”

Unfortunately, Manning was unable to climb the rope. But that didn’t dissuade him from trying harder and moving to the next challenge.

“My battle buddies definitely helped out,” Manning said. “Even after you failed and had to do burpees as a replacement, they were right there cheering you on the whole time.”

Cadet MacArthur Lynch, of Franklinton, North Carolina, faced the same issue as Manning when it came to climbing the rope. However, he did complete it and found his buddies were a big help when climbing the rope. 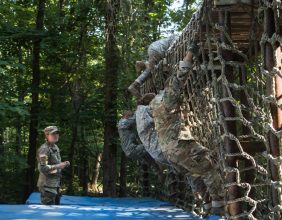 “Yeah, they were a big help,” the Middle Tennessee State University Cadet said. “Getting a chance to watch them go through the obstacle first, that gives me a chance to prepare myself for it. And when I was actually on the rope, they cheered me on the whole way up.”

Cadet Alex Basile, from Florida State University, also faced issues with the rope but his were due to the method he had used was ineffective.

“I did complete it, but it took everything I had,” Basile said. “Because I didn’t really understand the footing so it was a lot more challenging than it probably would’ve been.”

Although he climbed the rope by himself, Basile wanted to make sure he credited his squad as well.

“I wouldn’t have done it without them,” Basile said. “I got great motivation from everyone in first squad. Best squad.”

Cadet Arlene Campos, a Tyler, Texas native, faced a different challenge then the rest of her buddies. 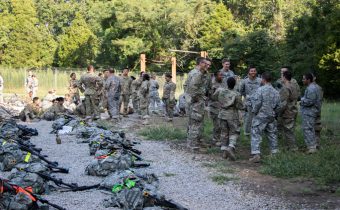 Her trouble came from the Monkey Bars that were just out of her reach, but, thanks to her battle buddies, she was able to complete them with little issue. She also walked away more fired up and ready to test her and her buddies’ speed against the other squads.

“We did pretty well,” the University of Texas – San Antonio Cadet said. “We are definitely ready to take on squad 4 in the course race.”

Every Beginning Has An End