FORT KNOX, Ky. — On July 31, 9th Regiment Bravo Company spent their last full day of their Field Training Exercises conducting a raid mission on the enemy. The combat was business as usual, until the 4th Platoon was met by some surprise visitors. 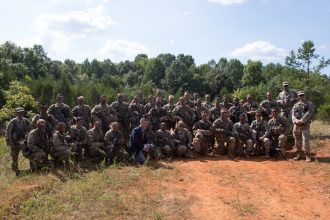 The Medal of Honor is the country’s highest and most prestigious military decoration, awarded to military service members who have distinguished themselves by acts of valor.

Bellavia received the award on June 25 for his actions in 2004 during the Iraq War. On that night, he provided cover fire for his squad to escape an insurgent-filled house, then re-entered alone with an M249 automatic machine gun and cleared out the entire house of enemies single-handedly.

Bellavia has been making his rounds around the country to speak to various groups of the Army. This time, he was invited to check out Cadet Summer Training.

When the mission was successfully completed, the Cadets sat down to hear some words of wisdom from Funk and Bellavia. Bellavia spoke about several virtues, including motivation, courage, and patriotism. 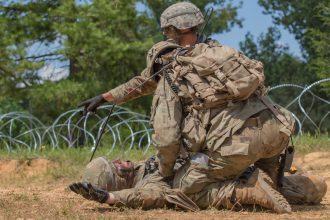 Early on, he discussed leadership qualities. “You were born as a leader; you just have to find your destiny,” Bellavia said.

He then hit on the one thing that unites every Cadet at Advanced Camp: the same flag on their shoulders.

“You are one team,” Bellavia said. “It doesn’t matter what you look like, who you worship, what you love, what’s on your iPod. You are willing to be here.”

When addressing the common fear of failure, Bellavia said, “You want controlled failure. Don’t be afraid of making mistakes, be afraid of not making a decision.”

After giving a large list of noteworthy advice, he wrapped up with some inspirational words that Cadets took to heart.

“I pray that you never see combat, but I’ll tell you what, you walk off a field of battle and bring all [of] your men and women home with you, there is not a thing in this world you can not do,” Bellavia said. “Be proud of what you stand for, and understand that every single person that gave you a tip today has been shot at, faced the enemy, and is here to make sure you come home.” 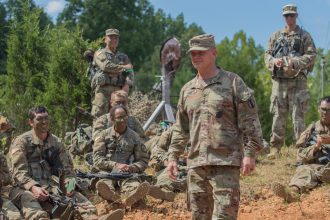 The Cadets followed his speech with a barrage of Hooahs. For several Cadets, privileged and blessed were the words that came to mind when elaborating on this experience.

“It was an honor in the truest form of the word,” Cadet Christopher Bruce, from Rutgers University, said. “A man like that – his words come from a different place and have a different meaning, because he’s been there and he’s done the things he talks about.”

Cadet Jake David Rauenhorst, from Minnesota State University, Mankato, added, “It was very humbling meeting a Medal of Honor recipient. Just hearing how fired up he was for our country and America in general was incredible.”

Each Cadet had their takeaways from what was said. For Cadet Peter Demet, from Christopher Newport University, the speech put a lot of things in perspective. 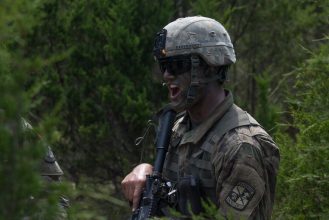 “Everyone, including non-combat roles, are going to be in the face of the enemy one day,” Demet said. “It helps give you the drive and motivation to not back down when the time comes.”

He then went on to say, “It helps you re-assess why you are in the military – if you’re in it for selfish reasons or if you are going to be here to fight for the country you love.”

Cadet Jordan Lutz was flooded with gratitude to see higher-ups in the Army check on them.

“I think it makes us feel like they care,” Lutz said. “To see that people of high rank are coming to look at us Cadets training to be future officers, training to possibly one day be in one of their positions; to see that is just amazing.”

The Field Training Exercises are a physically and mentally taxing challenge for Cadets, and the 9th Regiment are now finished with it. However, even though their time at Advanced Camp is nearing its end, their futures with the military are still to come.

Hopefully, seeing VIP’s stop by and affirm their sense of purpose will lead to a more focused and passionate platoon of Cadets; one that is prepared to fulfill their destiny.

I’ve Got Your Back