FORT KNOX, Ky. — Cadets from 6th Regiment, Basic Camp spent the day at the range to get the first-time experience of sighting and shooting their M4 rifles.

This training may seem basic to many, but it reinforces the idea that no matter where the Cadets end up, they are a rifleman first.

Eastern Washington University Cadet Justin Mebes, may not be new to shooting, but his take on the mantra, “Every Soldier, a rifleman,” drew an interesting comparison to another.

“I want to be a Ranger,” Mebes said. “My dad was a Ranger, and they say that no matter what your MOS is, you’re always a Ranger first, so that resonates with me.”

However, this mantra not only resonates with the Walla Walla, Washington, native. It gives him a new look on his weapon and his role as a future officer.

“So, what ‘every soldier, a rifleman’ means to me is that you need to learn how to use your equipment first,” Mebes said. “Your rifle first. That’s your most important tool, other than yourself. We should break the mold, and start setting the example for our soldiers to follow.”

Cadets are trained to be comfortable with their rifles at these ranges. So that they know to rely on it and can use it should the need arise. Something that Mebes not only learned, but Cadet Chevon Miller did as well. 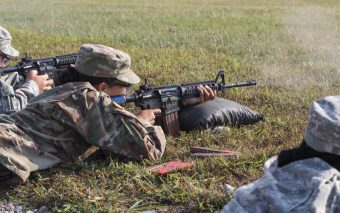 A Virginia State University Cadet, Miller shared her thoughts on the mantra and what it meant to her moving forward in her career as a future Army Officer.

“To me it means, that you are responsible for your rifle,” the Richmond, Virginia, native said. “Your rifle is the thing that will always be there for you when engaging the enemy. That is what you use to survive. Also making sure to treat your rifle as part of your family or something to that nature.”

Cadet Nicolas Wells, of Atlanta, Georgia, was another newcomer to this range, but also the M4 rifle itself.

Although he may have been a newcomer, that didn’t stop him from succeeding and looking to the future to improve on what he had done today. Vowing that he would return to the ranges more often to get better and better.

This attitude also played into Wells’ understanding of the phrase, ‘every Soldier, a rifleman’. 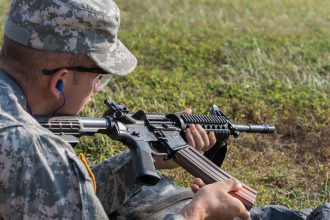 “You have to look to that phrase and use it to set an example for people under your command,” the Eastern Washington University Cadet said. “Because once you become an Officer, you’re setting the goals for everyone else that you have already reached in your training. That’s what that phrase means to me. When I hear that phrase over and over, it gives me motivation to push harder and do better.”

Cadet Samantha Engle, who had been shooting competitively with pistols before joining Basic Camp, differed from Wells only slightly in her ideas on what the mantra meant to her. 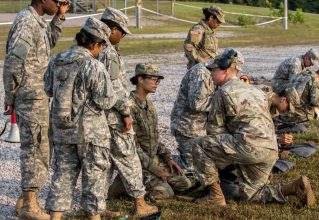 A Cadre member explains how the adjustments he made to the weapon’s sights so Cadets will be able to do it on their own during their time at Fort Knox, Ky., Aug. 2, 2019. | Photo by Jacob Hempen, CST Public Affairs Office

“Everyone should be trained with a rifle, and you are only as strong as your weakest link,” the Plymouth, Michigan native said. “So, if people don’t qualify, give them that extra training so they can qualify and become confident in their ability to shoot.”

No matter the branch, no matter where these Cadets end up, they all know that this training is important to their futures. As well as the Soldiers they will be leading.