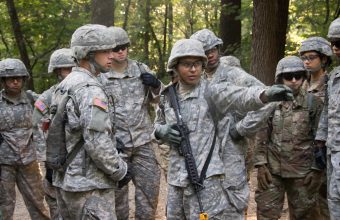 The course evaluates Cadets on their ability to plan and execute objectives in simulated tactical scenarios with limited resources. The TDC is challenging as it requires Cadets to remain cohesive within their squads.

“Everyone has different ideas and is capable of different movements,” said Cadet Christy Morales, attending the University of Central Arkansas. “We eventually got specific people to do specific things and others just followed as needed.” 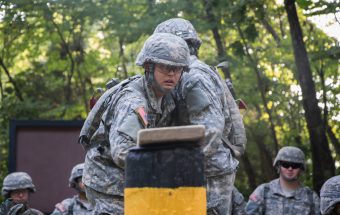 “I have seen people step over the leader, and the leader has had to step over people who were already talking,” said Katelyn Sacco, a Cadet at Rutgers University. “I want to be an assertive leader but I also want to properly delegate roles to my followers.”

Sacco said that observing the interactions between previous leaders and followers influenced how she chose to interact with her squad.

“I am just trying to be quiet since there were a lot of other leaders in the previous mission we completed,” said Sacco. “I just want to be a good follower and focus on following the designated leadership through this exercise.”

Cadet Wilims Mora, from the University of Houston, expressed how he felt that a single leader makes mission execution more efficient.

“Whenever there is a leader, I firmly believe that he or she should be the one planning,” said Mora. “The leader should be delegating roles as opposed to everyone throwing out ideas and confusing everyone.”

For Cadets who are anxious to lead, following may be difficult. Regardless of rank or position, however, each person has a role to play in carrying the team to success. The team building that Cadets experience at the TDC are invaluable lessons in leadership as well as followership.