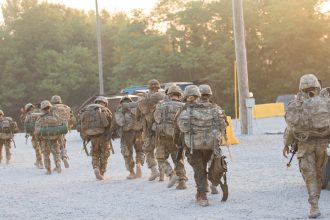 Between release-ruck marches and formation-ruck marches, each Cadet has their preferences; most prefer the release as they can go at their own speed, do their own thing.

A formation-ruck march keeps Cadets orderly, a tactical move that ensures they hone their field skills while they march. Cadets are told to keep silent, save the sound of their boots hitting the ground.

While the ruck march may seem to drudge on slowly, Cadets find ways to keep themselves entertained.

“It was more difficult than what I’m used to doing at my university,” Cadet Kyle Gallagher, a Yukon, Oklahoma native, said. “We don’t practice with full rifles or helmets and all that stuff, so you definitely get a different feel.” 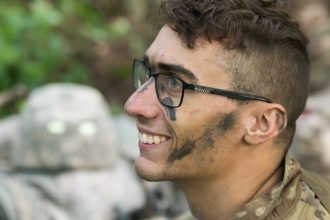 The Oklahoma State University student refused to let the added-weight challenge bring him down, though.

“It was much nicer to ruck with a bunch of people that I’ve been here with, spending the past 23 days with, bonding with,” Gallagher said. “That’s what really kept me going, everyone that I’m around.”

Gallagher called the ruck march itself a mental game, he said it was all about keeping your morale high; each Cadet has their own method to stay positive, but some methods are more popular than others.

For example, singing is a popular one (when the Cadre allow it, that is).

“They sing a lot of Journey,” Gallagher said with a laugh. “’Old Town Road’ of course, because that’s what’s relevant.”

Cadet Aaron Schmid, from Dover, Delaware, isn’t as hip on staying relevant as most other Cadets, though. His playlist is a little more old-school.

“You have to have the classics, like ‘Don’t Stop Believing,’” Schmid, who attends Brigham Young University – Idaho, said. “Then ‘Eye of the Tiger,’ those are classics, you have to have those. Need to have some rock in there, some Metallica and AC/DC.” 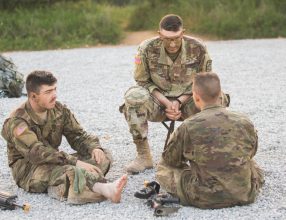 Schmid said he still likes to keep some of the newer music on his rucking playlist, but he most definitely sticks to the rock genre.

Cadet Kyle Harris, a Virginia Beach, Virginia native, said his go-to rucking song is normally whatever he listened to last.

“This morning, I think it was John Mayer,” the Virginia Military Institute student said.

“I just kind of try to take my mind of the ruck,” Cadet Victor Mills, a Jacksonville, Florida native, said. “So, thinking about what we’re about to do next, the fact that I’m so close to being an officer, I’ve got my mind zoned out. Focusing on what gives you peace.”

Mills, who attends the University of North Florida, says he thinks singing during a ruck would cause him to run out of breath faster.

From Finding Peace to Feeling Peeved

Despite the peace Cadets may be able to find in “zoning out” through a ruck march, there’s always something that manages to grind their gears.

“My pet peeve is probably whenever I have to walk the same pace as everybody else,” Gallagher said, adding support to the Cadets who prefer release-ruck marches. 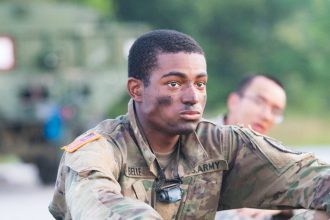 Gallagher acknowledges that formation rucks are beneficial in morale boosting, but he still wishes he could do his “own thing” when ruck marching.

Harris’s pet peeve isn’t so much with the ruck march itself, but rather with those around him who may be striving a little farther than they can reach.

“I think one of my pet peeves is when people like to take as much stuff as they can and they end up falling out,” Harris said. “I feel like you should know where you’re at before you try to grab the biggest gun you can and throw a radio in your ruck.”

When people take too much weight during a formation-ruck march, Harris said, they hold up the entire company when they have to switch out their gear.

From here, Cadets move into AO Panther for their next FTX. There they will enter the “walk” phase of their field-training exercise time.

Many of them are looking forward to this more challenging stage in their time at Advanced Camp, believing it will make the days feel faster.