FORT KNOX, Ky. — On Aug. 5, Cadets of the 10th Regiment had an early morning fighting the enemy during a defense mission at AO Grizzly. This is their last full day of the Field Training Exercises (FTX), with graduation just around the corner.

Defense missions are pretty straightforward: the platoon is set up at a patrol base with borders and protection surrounding it. The Opposing Force (OPFOR) wants to take that base over, and plans to attack it. The Cadets have no knowledge of when the OPFOR are coming, but have to stay quick on their feet and maintain control of their location. 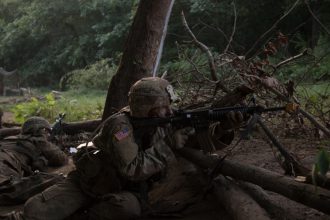 A Cadet aims down his sights to fire at the enemy attack. | Photo by Matthew Barnes, CST Public Affairs Office

An interesting element of the FTX is that it gives everyone a chance to lead the platoon at some point. The Platoon Leader (PL) and Platoon Sergeant (PSG) have a lot more responsibility in the planning process, and need to make fast decisions in battle. One challenging hurdle for this mission’s PL, Cadet Kevin Liu out of Rutgers University, was leading so early in the morning.

“I’m not a morning person, so at 4:30 when I got up, I was pretty mad,” Liu said. “It was really dark out when fire started, so there was kind of some chaos with a lot of voices and things happening.”

He added that the main solution to those issues was following his checklist and maintaining priority throughout the action. Noe Gonzalez, a Cadet from the University of Oregon, was just a regular Joe during this mission, but still had to keep watch over a large section of ground. He said he noticed a lot of sleepiness among the group. 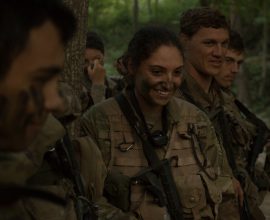 Cadets laugh after sharing a funny observation made during the mission. | Photo by Matthew Barnes, CST Public Affairs Office

“We were pulling security for an hour before anything even happened, so that lull time – you get people who are starting to get sleepy, people getting distracted and not looking at their sectors of fire,” Gonzalez said. “I think that is one of the hardest parts – just waiting for the expected when you don’t know when it’s going to be coming.”

While the lack of light makes missions more strenuous, it also gives Cadets even more opportunity to improvise and figure out how to win battles in the moment.

“Problem solving and working on the fly is what makes a leader,” Liu said. “You can’t expect everything to go flawless. I used to plan out everything, but I realized that rarely works. What makes a leader is how flexible you are, because it shows how you deal with the things that are thrown at you.” 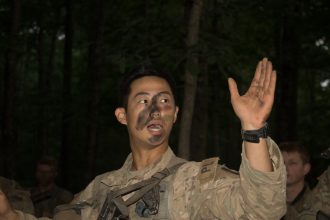 Cadet Kevin Liu, from Rutgers University, shares his perspective on how he felt the mission played out. | Photo by Matthew Barnes, CST Public Affairs Office

The Cadets received some positive feedback in their After Action Report and were able to conquer the dark. After a few more missions in the light, 10th Regiment will be rounding the corner to finishing Advanced Camp strong.