FORT KNOX, Ky. – Cadets from 10th Regiment, Advanced Camp got to shower and rest before embarking on their 12-mile foot march from TAA Densberger to their barracks, August 6. 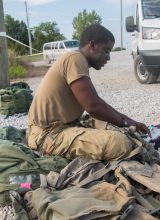 Before arriving at TAA Densberger, Cadets conducted their field training exercise (FTX) in the dense woods for over a week. There was a refit opportunity between each of the FTX lanes for Cadets every few days which allowed them to organize their rucksacks and relax before continuing their training.

With graduation in sight, the Florida Southern College Cadet said that he was excited to get home to his family and fiancé.

The 12-mile foot march is the only thing standing between Cadets and the week of cleaning and turning-in equipment, learning about potential branching opportunities, and out-processing they must complete before returning home to their families and loved ones.

“My daughter’s birthday is in five days,” said Cadet Jadaleral Webster, attending the University of North Florida. “She wants one of those electric cars she can drive.” 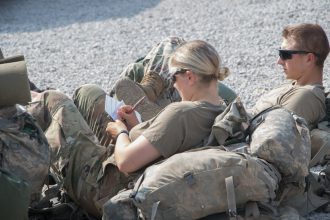 Although Webster will not be able to make it home in time to celebrate with his daughter, he has plans to give his family his undivided attention – and his daughter her car – before he has to return to class.

“I am turning my phone off completely,” said Webster. “I am going to take my wife out to a French restaurant for being such a trooper in my absence.”

While most of them are anxious to graduate, Cadets are able to reflect on the positive experiences they had during Advanced Camp. 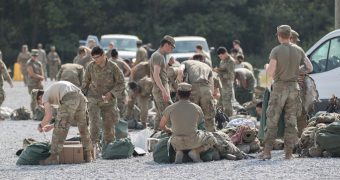 Two Cadets from the University of Guam expressed how grateful they were to have had the opportunity to meet so many different people.

“We have met such diverse people here at camp, people who we otherwise would have never known,” said Cadet Larry Llegado.

Cadet Abraham Takeshi echoed his battle buddy’s sentiments and added how he plans to take what he has learned at camp back to their university.

“We have learned so much here, especially from other Cadets and the knowledge they bring from their universities,” said Takeshi. “I am excited to return to Guam and teach the MSIIIs what they need to know and expect so that they can be prepared for camp.”

Despite the week and 12 miles ahead of them, 10th Regiment Cadets are looking forward to their homecoming with excitement while reflecting on their fond memories of the past 30 days.