FORT KNOX, KY. – It was a perfect morning for 10th Regiment, Advanced Camp Cadets to march 12-miles back to base to prepare for graduation in a few days.

Cadets woke up around 1 a.m., they grabbed their 35 pounds, or more, rucksacks and got into formation. Noise was at a minimum.

“The silence was a challenge, not being able to talk and motivate each other through the ruck was rough,” said Cadet Cameron McNeil, from Virginia Military Institute.

McNeil wasn’t the only one who found it hard to stay silent.

“They had to tell us to be quiet because we were singing and making tons of noise and encouraging the platoon,” said Garner.

Toward the end of the ruck march, about a mile out, Cadets heard music signifying the end was near.

Cadet Stephanie Rivera, from the University of Hawaii, said hearing the music brought her joy. 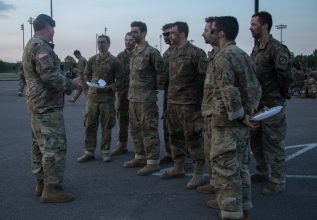 “I felt a lot of happiness, the music started playing and the Army Song came on, we all started cheering, it was a great experience,” said Rivera.

Garner said he also knew from the music the end was near, “I knew we were close when I could hear the music playing and I got a sudden burst of energy that came through my body.”

The end can be a very bitter sweet moment for these Cadets, who have endured a lot over the last 31-days.

“I’m really happy but I’m kind of sad, because I know that advanced camp is almost over and all of the bonds and friendships that were created here are going to come to an end as everyone goes down their own path,” said Garner.

Do the Right Thing