The competition tested the basic foundations of D&C on how you march and conduct yourself in a formation. For the first portion of the competition, each platoon in the regiment created a routine that included numerous required elements and commands. 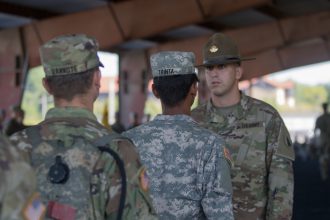 Cadet Josue Trinta, from the University of Puerto Rico, demonstrated a strong sense of discipline when he won the regimental D&C competition. The regimental competition is run like a game of “Simon Says” where Cadets are eliminated when they perform the wrong command or do not do a command correctly.

When well-disciplined, things tend to go smoothly. For 3rd Platoon, Alpha Company, everything went to plan because they focused on the discipline they learned over the past month. Their hard work paid off when they won the platoon D&C competition. 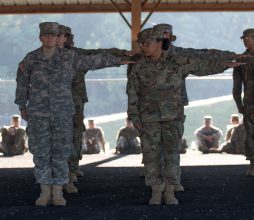 That is not the same story for 1st Platoon, Bravo Company. Last minute, their platoon sergeant was switched with another Cadet so they were forced to adapt.

“I think [our replacement platoon sergeant] did a good job at gathering everyone together last minute,” Cadet Corey Tinay, from the University of San Francisco, said. “There were things that could have been cleaned up but I am proud of my platoon.”

First platoon learned to adapt during the D&C competition. Regimental Senior Drill Sgt. Miranda Haymer, believes that learning to adapt in the moment is important for not only a future in the Army but also a future in the real-world.

“You have to be level-headed. [Mistakes] are something that are going to happen in the real-world,” Haymer said. “It could be any minute that you are given a job and you have to adjust, plan and execute that mission whether it is last minute or you had been planning it for a while.”

Looking to the Future

Moving forward, the Cadets learned from their mistakes.

Task Force Warrior Command Sgt. Maj., Robert Russell, spoke to the Cadets after the competition to advise and inspire them. 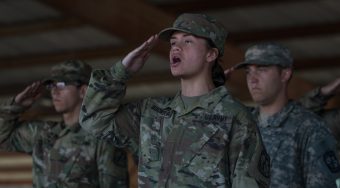 “What are you doing today that is going to make you a better leader tomorrow?” Russell asked the Cadets.

Cadets responded with a verity of answers but Cadet Emily Heil, from Marathon, Wisconsin, and attending Murray State University, chose to listen to her non-commissioned officers.

“I know that they have been here longer and they know a lot more than I do,” Heil said.

Haymer wants Cadets to constantly focus on learning to become a better leader.

“Mentally prepare yourself,” Haymer said. “Be prepared to fail and learn to adjust to that failure.  Always be learning, even if you are a major or a captain, you’re always constantly learning. As a Cadet, you have to realize what position you are in, how to take constructive criticism and adjust.”