Advanced Camp is a long, tasking 37 days long; challenges present themselves at every corner and Cadets are expected to address and overcome them.

Their graduation ceremony is a very welcome event, reuniting them with their family and friends and sending them on their way home.

Out of all they learn at Advanced Camp, many Cadets have something in particular that sticks with them. 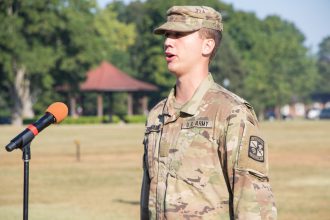 “The most important thing I’ve learned is just to listen to others and not be rigid in your thinking,” Cadet Dylan Tossavainen, a Jacksonville, Florida native, said.

The New York University student delivered the Cadet Creed at today’s ceremony. Tossavainen said he was most looking forward to rewarding himself with some box mac’n’cheese and spending time with his family.

Cadet Will Rettenmeier, from Des Moines, Iowa, a RECONDO recipient, was another Cadet walking away from camp with newfound knowledge he’d keep with him always. 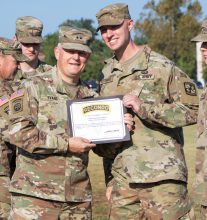 “I was part of a very diverse group of people here,” Rettenmeier, who attends Iowa State University, said. “But we managed to pull together and just stick it out, so one team, one fight. A common goal will unite everybody.”

Rettenmeier, who plans on eating Chinese food as his first meal away from Fort Knox, was not the only one who found Advanced Camp’s diversity to be one of the best parts of the summer.

“I think this is the first time that I’ve been able to work with a group of people that I’ve never met before and still come together to accomplish a common goal,” Cadet Justin Perry, a native of Stovall, North Carolina, said.

Perry, a student at the University of Wyoming, said he is accustomed to working with the Cadets at his school; each of them know each other’s strengths and weaknesses.

Here at Advanced Camp, everyone is new to each other, so there is much to adapt to.

From the graduation ceremony, each Cadet heads home. Maybe it’s not home, maybe it’s back to school, but they are going back to family and friends.

Family and friends have a special place in our hearts, and if there’s one thing we can be sure of, it’s that home is where the heart is.

Getting Down to Brass Tacks

How well do you know the ASBP?