FORT KNOX, Ky. — One thing that distinguishes Basic Camp from other levels of Army training is the number of Cadre who oversee the training. A lot of the basic camp instruction is given by drill sergeants and newly commissioned officers, but there is another group helping with the basic camp regiments: MSIII trainers.

MSIII stands for Military Science 300, and it is made up of ROTC Cadets in college who have completed their junior year of school and graduated advanced camp this summer. After graduating, some opted to stick around in Fort Knox for basic camp and work as mentors for Cadets. 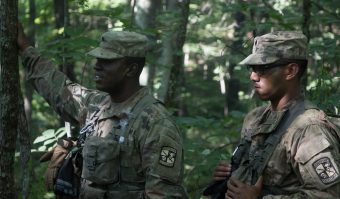 During their Field Training Exercises, 6th Regiment Cadets in 1st Platoon, Alpha Company had two MSIII trainers with them. Their job is wide ranging, from giving advice to struggling Cadets, to being a middle man when a Cadet is afraid to ask a drill sergeant a question, to even filling out paperwork from time to time.

“They are active 24/7,” Cadet Anna Pascle, from Western Michigan University, said. “If they’re not with us, they’re doing something for the non-commissioned officers or lieutenant colonels, so they’re definitely busy.”

The main incentive behind pursuing the MSIII trainer route is that it gives the trainers more Order of Merit List (OML) points. The Army essentially ranks Cadets when it comes to deciding where to branch them, and the more OML points you have, the higher percentage chance you get placed with the branch you want when you commission. 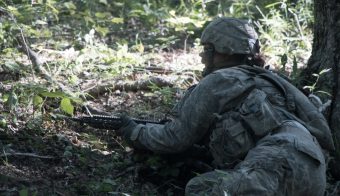 With drill sergeants often perceived as intimidating to Cadets, MSIII trainer Ricardo Pinedo, a student at Kennesaw State University, likes to take a more casual approach with the Cadets.

“Being enlisted, I know what it is to be at basic training and getting yelled at every day, so I like to actually get to know them, have some one-on-one time with them, and just talk to them and give them good advice,” Pinedo said.

Since MSIII trainers are Cadets as well, and are similar in age to the ones at basic camp, they are great at identifying with the people in their platoon, and have the opportunity to watch them grow through the summer.

A challenging element for trainers is fighting the fatigue of being in Fort Knox for different camps. Advanced Camp pushes Cadets to their limits for 37 days, so most Cadets just want to go home and relax after graduating. MSIII trainers just jump right back into things.

Cadets run through the woods in hopes of flanking the enemy force during their mission on Aug. 8, Fort Knox, Ky. | Photo by Matthew Barnes, CST Public Affairs Office

“We’re definitely tired, we definitely want to be home hanging out, but the good thing about this is it’s [the training] fresh on our mind, so we get extra practice and experience,” Pinedo said. “That’s how we’re able to help these Cadets out; we get to pinpoint everything they’re doing wrong so that we can correct it and help them out.”

Although two camps is a long time to be away from home, these trainers hope the impact they are making at basic camp is worth it — for them and the Cadets they train.