FORT KNOX, Ky. – “The Army will come and go, but family will always be there,” said CSM Timothy Guden, U.S. Army Training and Doctrine Command, to Cadets from 5th Regiment, Basic Camp, at their graduation on August 11.

Family and loved ones traveled from near and far to see their Cadets graduate. For some Cadets, military service is a familial legacy which they are now continuing. 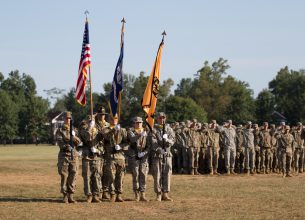 A color guard made up of hand-picked Cadets from 5th Regiment, Basic Camp render honors during the playing of the National Anthem at graduation at Fort Knox, Ky., Aug 11, 2019. | Photo by Mary Kate Griffin, CST Public Affairs Office.

“I am not the first in my family to join the military. I am joining a long line of family members in service. It’s a family business,” said Cadet Cameron Cloutier.

In response to Guden’s speech, the Liberty University Cadet said that his family had been very encouraging during his time as a Cadet as well as his time leading up to his decision to pursue the Army.

“My family has been deeply supportive, making sure I am straight. They have supported me every step of the way,” said Cloutier. “It’s surreal to be finally graduating. I am grateful.”

Army trail blazers also exist among the ranks of the Basic Camp Cadets. Kathryn Johnson, a Cadet from the College of William and Mary, said that being the first in her family to pursue a career in the Army made her family’s support paramount in her success as a Cadet.

“I am the first one in my family to join the military and my family is here today which is exciting. This is our first time experiencing anything like this,” said Johnson.  “For me to be here is really special, especially for all of us [family].” 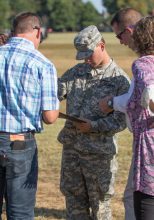 “Familial support is everything. It gives you the belief you can do it. You have to be intrinsically motivated to succeed, but that external support is important especially on bad days, because not every day is good.”

The youngest of three, Johnson relies heavily on the support of her two older brothers who were able to see her graduate camp.

“I have two older brothers that are absolutely everything to me. They are my only siblings and we are pretty close in age,” said Johnson. “They’ve always been a huge inspiration for me.”

In addition to mentioning familial support, Guden also reminded Cadets of their duty to live out the Army values.

“One of the first items you were instructed on here at Basic Camp were the Army values: Loyalty, Duty, Respect, Selfless Service, Honor, Integrity and Personal Courage,” said Guden. “You can all say them. You probably have them memorized. You can define them and can identify them with a nifty little acronym we assign them (LDRSHIP) Understand there is more to them. Can you live them?” 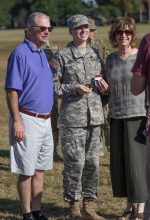 Cadets familiar with the Army values know what they entail and are likely to be reminded of them on a regular basis, as in the case of Cadet Skylar Standokes from the University of Central Oklahoma.

“Coming from a military family, I have been exposed to the Army values my whole life,” said Standokes. “Some people struggle to maintain discipline, getting up early and all the things the Army entails. It all comes as second nature to me.”

When asked which Army value she deemed most important, Standokes responded that respected resonated most with her.

Despite her newness to the Army and its traditions, Johnson explained that the Army values offer a challenging counterculture to mainstream lifestyle.

“It’s a learning curve, you don’t just wake up and do everything perfectly all the time, you’re still human,” said Johnson. “It’s about learning from those mistakes, learning to live constantly with integrity, personal courage and all the other Army values. They are all equally important.”

Upon successful graduation from camp, Cadets both new and familiar with the Army are walking away with refurbished characters and even closer family bonds.