FORT KNOX, Ky. – After a year of planning and three months of execution, Cadet Summer Training (CST) 2019 has come to a close. 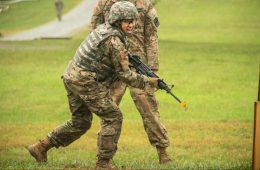 Cadet Yaribelitza Maldonado, from the University of Puerto Rico, communicates with her battle buddy as she advances forward during the blank fire iteration of Buddy Team Live Fire training at Fort Knox, July 17, 2019. This training teaches Cadets how to communicate with their battle buddy during high-stress situations. | Photo by Jodi Moffett, CST Public Affairs Office

The single largest training operation in the entire United States Army, CST trains over 10,000 Reserve Officer Training Corps (ROTC) Cadets from universities across the nation in 100 days to prepare them for their future careers as Army Officers.

One of the CST core planners Maj. Juan Renaud explained how planning for CST is a process which begins nearly a year in advance for each summer.

“This allows task force leaders, commanders and other planners time to reflect on the previous year, identify key efficiencies and implement them in the coming year,” said Renaud. 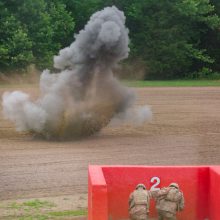 Efficiencies that were new as of 2019 include the buddy team live fire and live hand grenade training. The objective of introducing these basic combat training events to CST was to give Cadets fundamental training in their warrior tasks and battle drills.

“The addition of those two events allows Cadets to be exposed to what the young men and women they will be leading experience in basic combat training,” said Renaud.

Brig. Gen. Anthony Munera, the Deputy Commanding General of U.S. Army Cadet Command, said that CST “is a culminating event that ensures Cadets are ready to take the next step and commission.”

“CST focuses on the fundamentals of basic marksmanship, delivering lethal fire, throwing hand grenades and conducting the basics of maneuvering through buddy team live fire,” explained Munera, who served as the CST commandant. “This training will scale up as Cadets move on to their higher collective tasks. That all starts here with the basics.”

Apart from the rigorous tactical training they encounter at CST, Cadets’ leadership skills and techniques are put to the test.

“This is really the first opportunity where the Cadets on a large scale are exposed to the diversity of the Army. They are also exposed to one of the toughest challenges in the Army– leading their peers,” explained Munera.

“Cadets have to learn how to lead and harness the expertise that other Cadets bring to the table. The most successful leaders are the most engaged and engaged leaders understand who they are leading,” said Munera. “People don’t care what you know until they know that you care.”

The 12-month planning process that contributes to CST’s success ensures that Cadets receive the most up-to-date training possible. 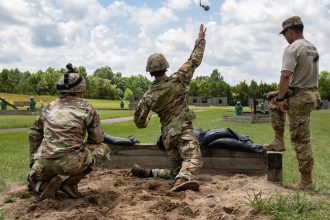 “We’ve been planning CST 2020 since May,” said Renaud. “Next summer we are looking at incorporating a stress shoot (“Battle, March and Shoot”) to test Cadets’ ability to employ their weapon systems under stress as opposed to the optimal environment they typically have for weapons’ qualification,” said Renaud.

“Cadets will also get to experience the night infiltration course (“NIC at Night”) which involves moving under simulated artillery fire being shot overhead while performing various individual movement techniques.”

CST–and Advanced Camp in particular–is meant to prepare Cadets for the second phase of their Basic Officer Leadership Course (BOLC) after they commission. While camp reinforces tactical fundamentals, BOLC lays the technical foundation for the remainder of each Cadet’s branch specific career. 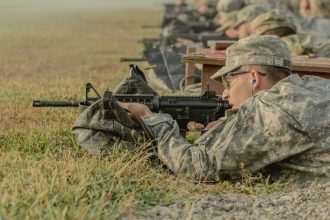 Giving Cadets the opportunity to fire live weapons at camp ensures that the soon-to-be commissioned officers are competent in their warrior tasks.

“This year we brought in 40 West Point Cadets to experience the field training exercise portion of summer training with ROTC Cadets,” said Renaud. “Next year we will bring in about 384 Cadets to partake in FTX and observe a combined arms live fire, including anything from bradley fighting vehicles and strykers to field artillery and engineering assets.”

CST is an ever-evolving training event under stringent scrutiny by its leaders and planners. With each year, successes are replicated and flaws are modified in order to equip America’s future Army officers with the skills and tactics necessary to fight and win.