With it, Cadet Summer Training 2019 ended.

Many of the 11th Regiment cadets, numbering 587, now return to their hometowns for what is left of the summer before beginning their final year of college.  A year that ends next May with a college graduation and an Army commissioning ceremony.

“There’s a future general officer, a future Army chief of staff, a corporate CEO, a senator, a congressman, a doctor, or a lawyer among you,” said Army Maj. Gen. Joseph Calloway, commanding general, Human Resources Command and the guest speaker for the graduation.

Calloway also mentioned that the regiment included amongst its ranks “a Miss California, a Guinness Book of World Record holder, a published author, a Rhodes Scholar, a Fulbright Scholar, and various and sundry other accomplishments.”

One cadet in the latter category is Desarae Cowley, who returns to what initially promises to be a much slower-paced life than she had over the last several years. 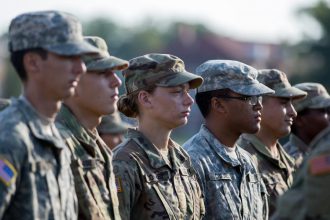 Cadet Desarae Cowley (middle), and Army resevist and policewoman with the Lake Erie College of Osteopathic Medicine Police Department, completes Advanced Camp at Fort Knox, Ky, 18 August, 2019. She will return to Edinboro University for a commissioning ceremony this September.

The 26-year-old Cowley graduated from Edinboro University in May with a Bachelor of Arts degree in Criminal Justice.  So academics aren’t something she needs to worry about going forward.

But as she was full-time student, she also held down full-time work as a policewoman with the Lake Erie College of Osteopathic Medicine Police Department for the past two years.  She reports back to her position after she completes her annual training with her U.S. Army Reserve Unit.

“I’m ready to see my partner, get back into the swing, and get back on the road.”

Her pre-camp life was hectic, busy, and sleepless.

Quitting wasn’t an option.  Her ROTC instructors, and other professors at Edinboro worked with her, understanding that some days she arrived at class straight from patrol on the overnight shift.

They excused her from lab on the occasions she had not been to sleep yet, then worked with her one-on-one during her off days from the department.  It all ended when she received her diploma.

“Life is easier,” the future Army Transportation officer said.  “When I graduated I felt all this weight off my shoulders.”

The easy life she now has is only temporary.

The Waterford, Pennsylvania native, who will commission in a ceremony in September at Edinboro, has applied and been accepted into the FBI Academy with hopes of becoming an FBI agent.

She chose the reserve component instead of active-duty because of her desire to be an FBI agent.

“Being a reservist I can find a unit anywhere in the country as I move around with the FBI,” Cowley said.

“People are our most precious asset and leaders are what make readiness happen,” Calloway, a University of Central Florida ROTC graduate, said. “Your ability to lead them is going to make or break readiness.”