FORT KNOX, KY. — It’s a bittersweet day, August 17, for families because they get to see their Cadets after 36 days of Cadet Summer Training at Fort Knox, Ky. 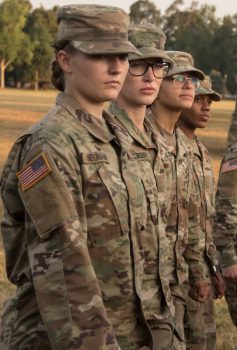 During Family Day it’s always a beautiful moment with the family members running up to their Cadet and hugging them as if they will disappear. But for Cadet Christina Meredith, from the University of Florida, this Family Day is a little more special. Although her biological father was unable to make it – he was sure to be there the next day to watch her graduate.

“It’s pretty awesome, not going to lie,” said Meredith. “This will be his first event he’s ever gone to. I mean, no one went to Ms. California or the times I’ve spoken to Congress or, you know, any of my special interviews that have gone on the last six months with my book tour, so it’s very exciting to have him here.”

Although having her father here is an added bonus, the main reason the 36th day of Advanced Camp is so bittersweet is because it means Meredith is one step closer to her dream of being a commissioned officer in the United States Army.

At the young age of 14, she fell in love with the military. The foster family she was with at the time enrolled her in Naval Junior ROTC (NJROTC) and at that moment, her life was changed.

“The Master Chief had me sign a clipboard and then he yelled at me to get my butt to the Quarterdeck, not having an idea what the quarterdeck was, I ran,” Meredith said. “Then all of a sudden I see this gigantic slab – it was a cement basketball court, with all these kids in the front leaning rest, sweating dripping in there face, with officers yelling at them. And I was like, I think I found the quarterdeck, and then I fell in love.” 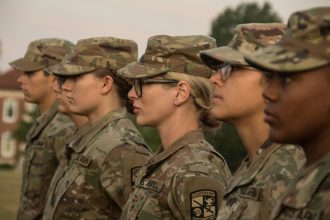 For the next four years of high school, Meredith was a part of the NJROTC program and won multiple awards. She was fully expecting to get an ROTC scholarship for college to continue her dream of being an Army Officer, but that dream was crushed.

“When I didn’t get the ROTC scholarship my senior year I was absolutely devastated,” Meredith explained.

Meredith thought that being an Army Officer was a dead dream. She went on and did other things; became Ms. California in 2013, started her own nonprofit, the Christina Meredith Foundation, and wrote a book about her childhood and how she overcame it.

It wouldn’t be until she moved back to Jacksonville, Florida almost a decade later that she would join the Florida National Guard. Shortly after she got back from basic camp she was contracted as a Cadet in the simultaneous membership program (SMP), which allowed her to earn her commission through college courses and ROTC while being a part of the Army National Guard.

“So I went in knowing this was the goal and you can’t quit, it takes a long time. I wanted to be an officer at 14. I lost my dream at 18. I’ll commission at 33 years old,” said Meredith.

Meredith never gave up on her dream of being a Commissioned Officer in the United States Army, for she will make that dream become a reality when she commissions in December of 2019.

Cadet Christina Meredith along with the other 594, 11th Regiment, Advanced Camp Cadets will graduate from Advanced Camp, Cadet Summer Training August 18, making them one step closer to being a 2nd Lt. in the United States Army.

Advice From a Leader to Future Leaders