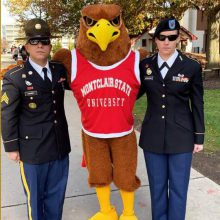 Cadet Czarnogursky has not only proven to be an outstanding Cadet, but an overall outstanding citizen. After a little over four years of prior service as an E-5, Fire Directed Center Specialist in Field Artillery, she applied to West Point where she spent one year at the United States Military Academy Preparatory school, and two years at West Point itself. Cadet Czarnogursky transferred this semester to Montclair State University and is now an MS3.

Aside from receiving multiple awards, and being heavily involved in her academics, Cadet Czarnogursky stuck out for a brave act of community service.

On September 1, 2019, Cadet Czarnogursky was on her way to go hiking when she and her friend came across the scene of a motorcycle accident. The victim of the accident suffered from a full amputation of their arm and a compound fracture of the leg. Cadet Czarnogursky took action using the tourniquet and bandage she kept on hand from her personal aid kit. Thanks to her quick response the victim was stabilized and was able to be evacuated safely.

Cadet Czarnogursky represents what it means to be an upstanding Cadet but even more than that—an upstanding citizen who epitomizes the meaning of “protect and serve.”

In the Cadet’s Own Words:

My time in the Army so far has been life-changing. Every day I have the opportunity to serve those around me at all levels, and the community at large. For me, that is the most rewarding part of being a soldier, and a leader. As an enlisted soldier, I realized how much I loved the profession, from the day to day interactions with those in my unit, to more advanced problem solving and learning how to integrate assets at various levels to accomplish the mission.

I always felt like I had a purpose, and that in some way, what I was doing mattered. My old BN CDR, now COL Jonathan Velishka, encouraged me to pursue a commission, recognizing potential in me that I myself did not see. I joined ROTC to grow as a leader, and continue a career in the world’s greatest fighting force. As a leader, I am motivated by the people around me.

I have been blessed with incredible mentors along the way, from various branches in the Army, who continue to encourage and teach me so that I can be the best version of myself. I am also driven by teaching and caring for soldiers. It is one thing I miss most about being an NCO, but something I look forward to doing at a larger capacity as an officer.

Putting the “Us” in Trust Fall: Confidence Course