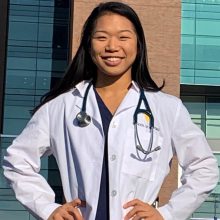 Cadet Lydia Wagner is one of the most dedicated and humble Cadets in the Mountaineer battalion. A naturalized citizen born in China, Cadet Wagner truly appreciates the freedoms and opportunities afforded to her as an American citizen. Her conduct in ROTC, college, and personal life exemplify what it means to be a selfless leader.

Since day one, she has put in more time and effort to improving herself and others than 90% of the Cadets in the program. Despite being a nursing major with a rigorous course load, Cadet Wagner is consistently in the gym, utilizing office hours, and training to improve herself physically and technically.

Cadet Wagner also volunteers with her local church year-round and worked at the campus hospital in her off time. She is the epitome of a self-motivated, driven Cadet whose humility only makes her achievements and accolades that much more significant. Cadet Wagner is a role model to her peers and is recognized by Cadre and Cadets alike as one of the top Cadets in the program due to her character and drive.

I joined Army ROTC to be a part of something bigger than myself. It also presents a great opportunity to constantly challenge myself – physically and mentally – and grow as an individual, team player, and leader.

Individuals who are consistently working hard and putting in the extra work to improve themselves so that they can be the best leaders possible are the ones who motivate me to do the same.

Additionally, ROTC allows me to one day commission as an officer, so that I can serve and give back to the country and men and women that have granted me so many amazing freedoms and opportunities.

Cadet of the Week: Kellie A. McCauley